Unfortunately, at this time, the Modkit is Windows only.

Upon completion of these steps, you should see something like this: 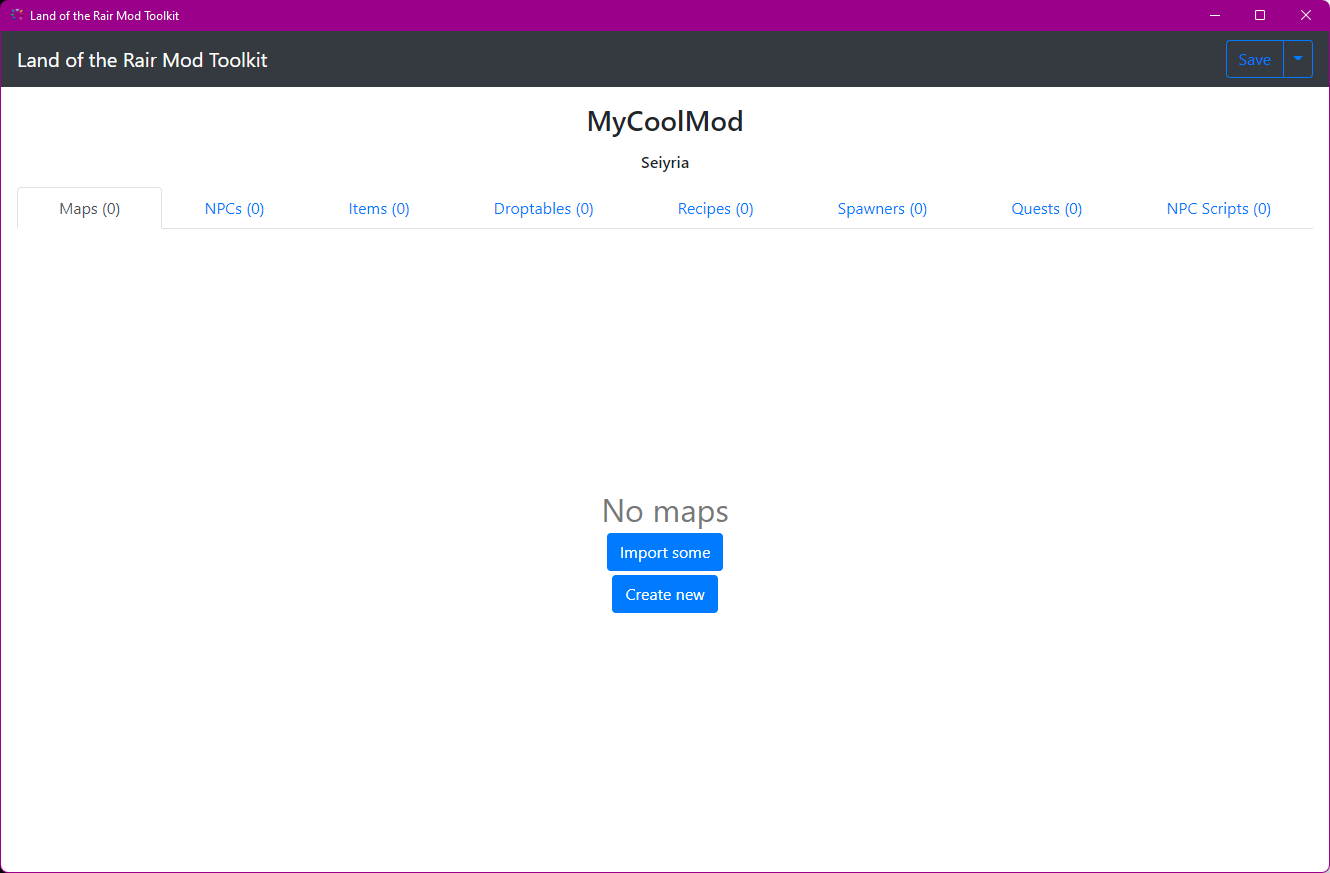 Here, you can import or create new maps. To get started, it’s recommend to hit “Create New”. This will create a map with the default settings, pathing, and sprite locations set up correctly.

Once created, you can continue to edit your maps as needed. For more help, check the map making guide.

NPCs are a fairly complicated interface. There’s a few tabs, and a few things to know about each tab. 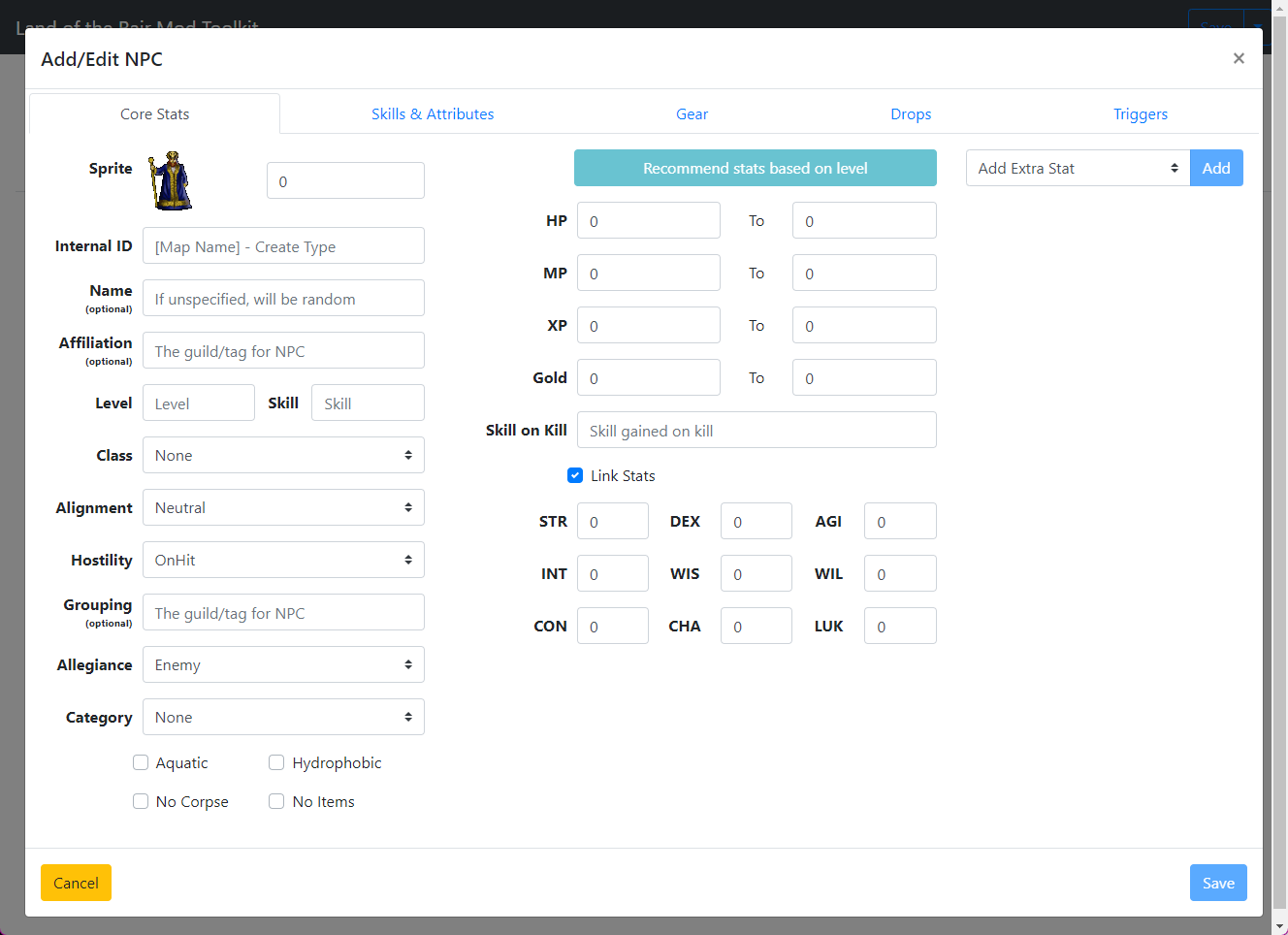 There are a fair few things set here by default. For example, hostility, alignment, class, allegiance, category, etc. These generally don’t need to be changed.

Things that do need to be set: 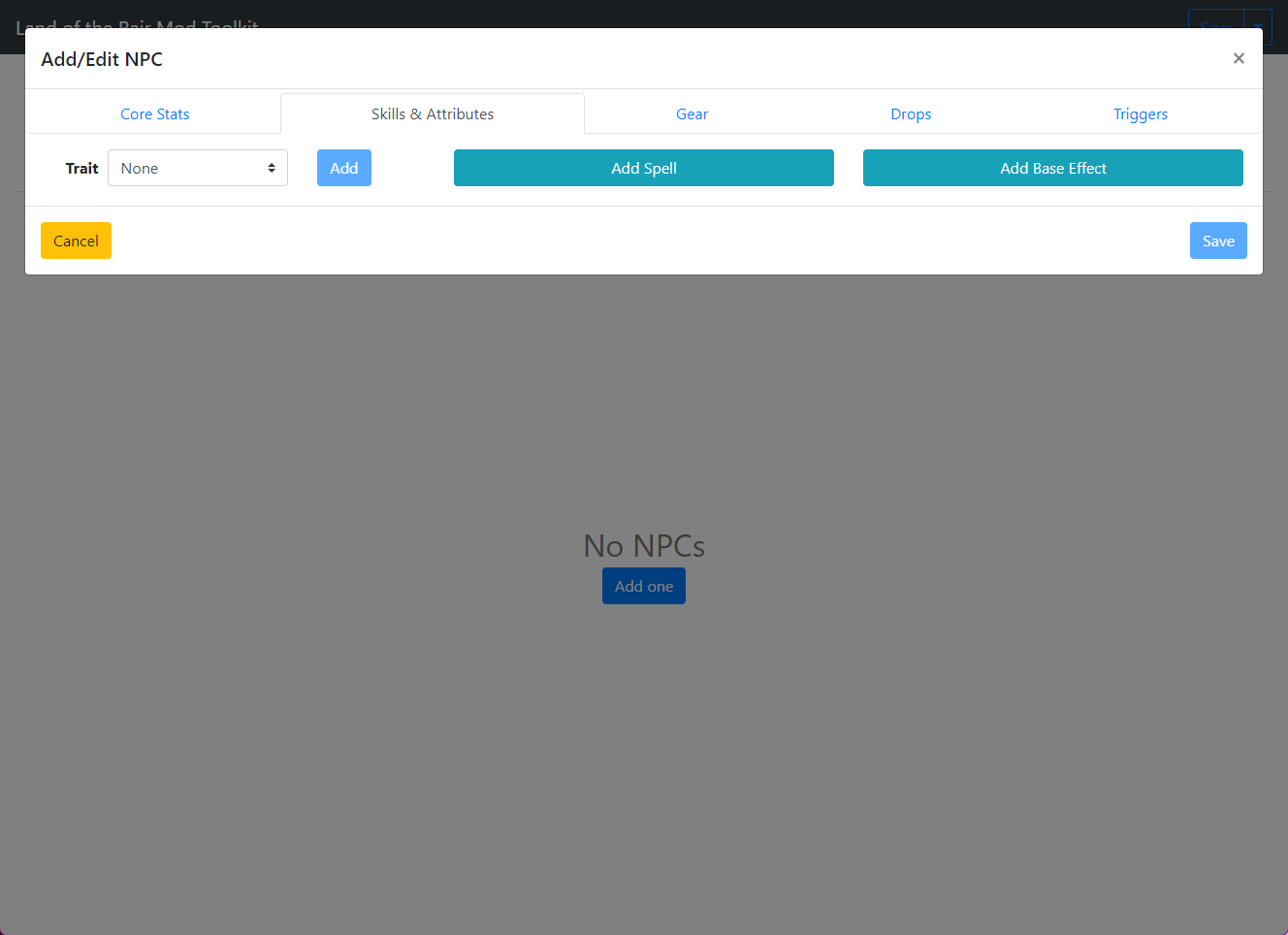 In the left column, you can add any existing trait to an NPC and give it a level.

In the middle column, you can add any spell to an NPC and give it a weight (see Weighting below).

In the right column, you can add any effect to an NPC for it to spawn with. 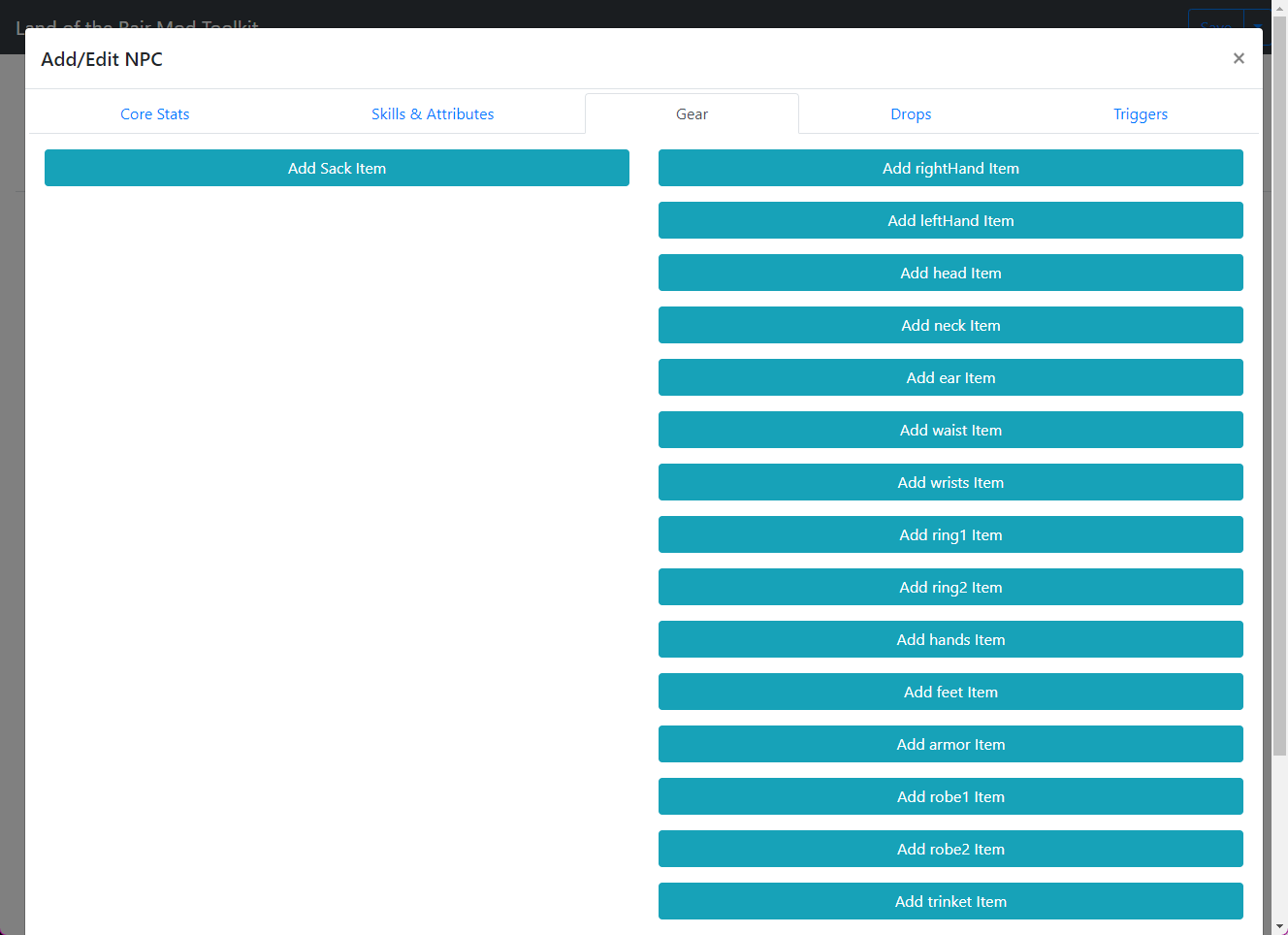 In the left column, you can add items to the NPCs sack for it to spawn with, as well as a weight (see Weighting below).

In the right column, you can add items for specific NPC gear slots for them to spawn with, based on a weight (see Weighting below). They will be wearing these items. It is common to have a “None” item that spawns most of the time, which is how NPCs get “rare” items. 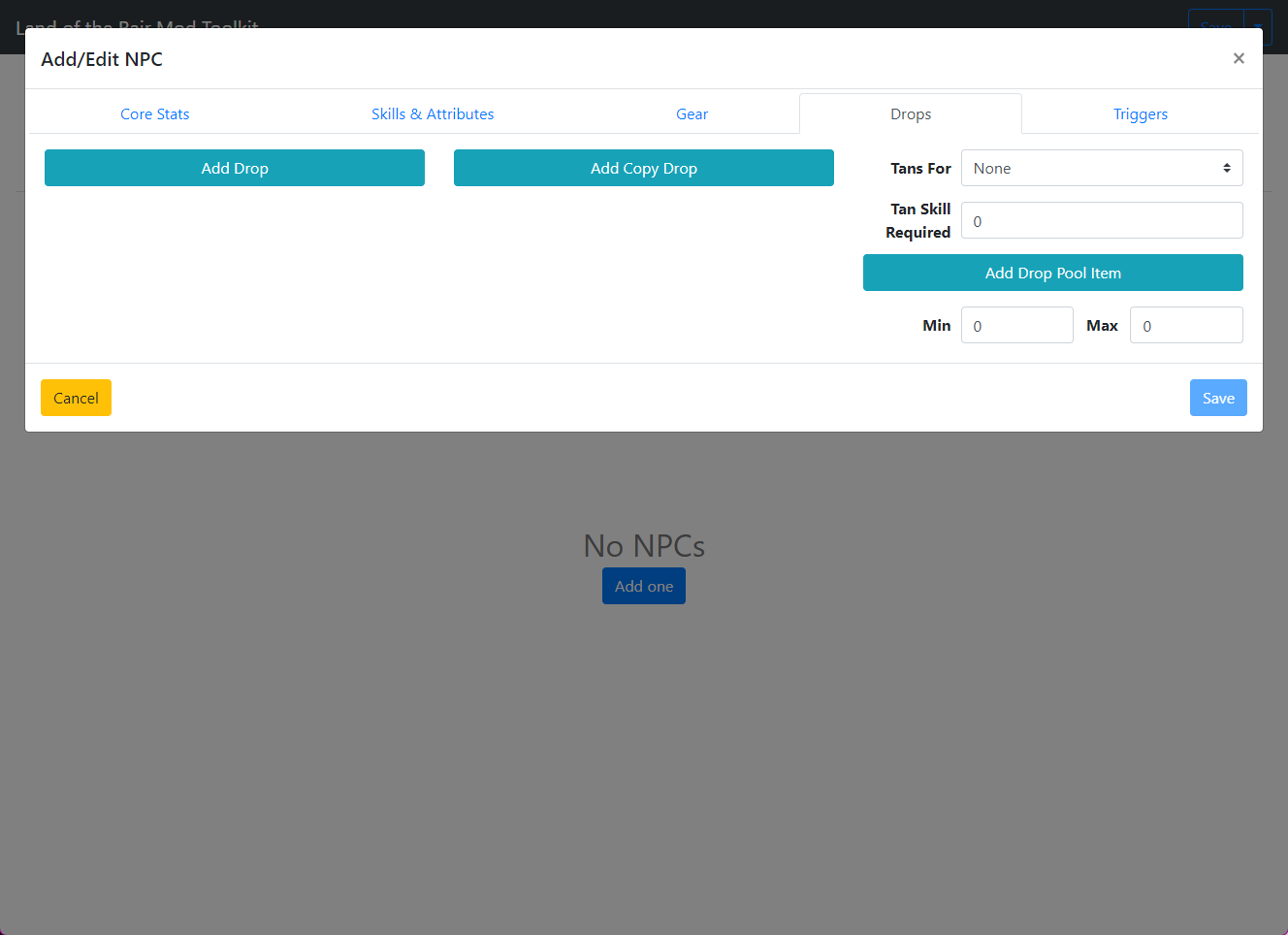 In the left column, you can add an item drop to the NPC based on weight (see Weighting below).

In the middle column, you can add a “copy drop” to the NPC. A copy drop allows you to mark an equipment slot as something the NPC should drop. For example, if the NPC rarely spawns with a cool robe in the robe1 slot, you could add that as a copy drop and it would drop when the NPC dies. This, in combination with weighted NPC item spawning from the Gear tab, is how rare item drops work.

In the right column, you can add what item the NPC tans for, if any, and the skill required to do the tan. You can also modify the drop pool, used for some boss NPCs like Saraxa. The drop pool is guaranteed to drop between min and max items, and it will pick that many items from the item list below it. 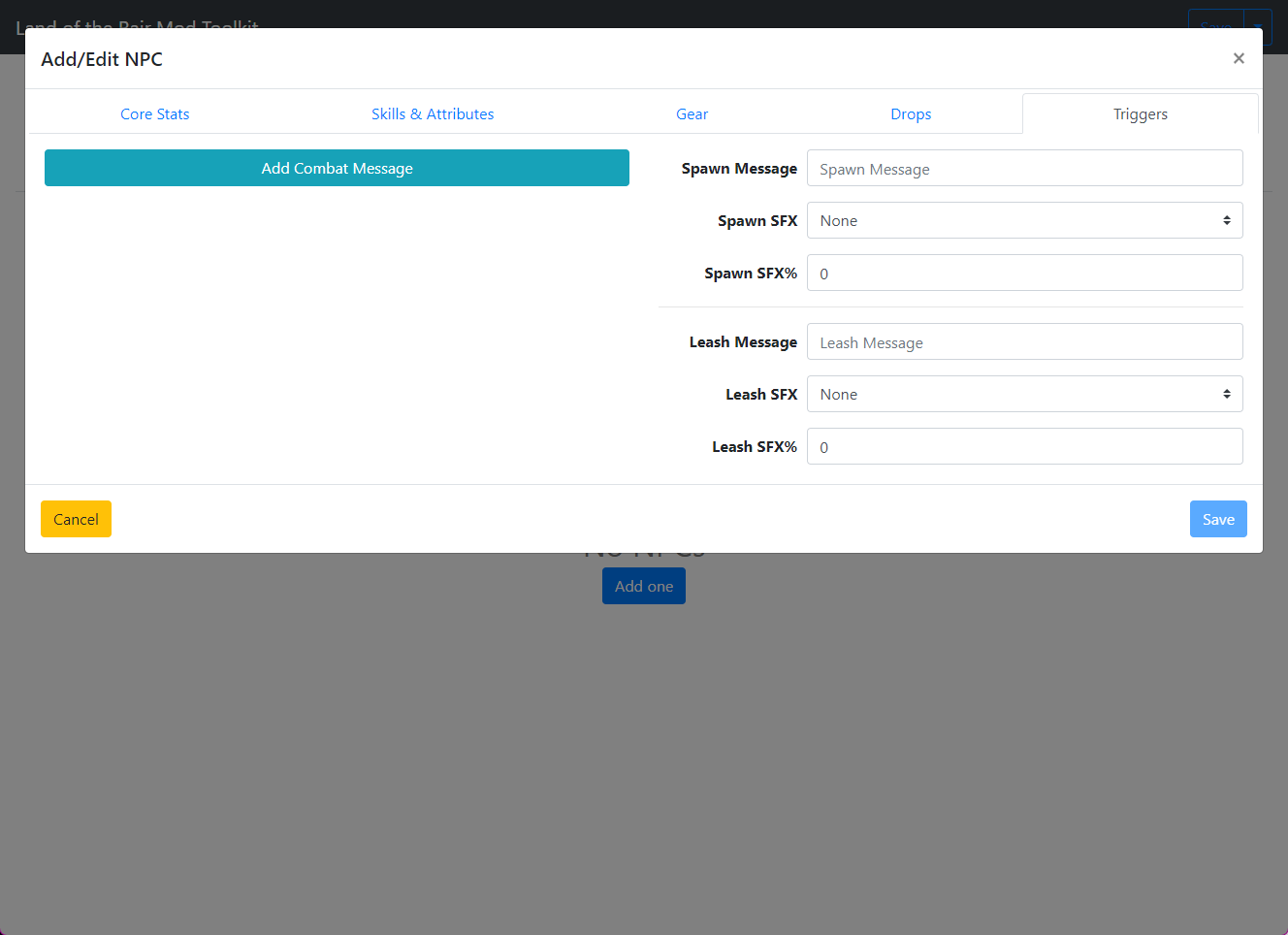 In the left column, you can add “combat messages” for the NPC to randomly say during combat.

In the right column, you can create sound effects for certain triggers for the NPC. The two supported triggers currently are spawning and leashing (when the NPC goes back to its spawner).

Items are fairly straightforward, as most of the fields are ones you’d recognize from interacting with them. 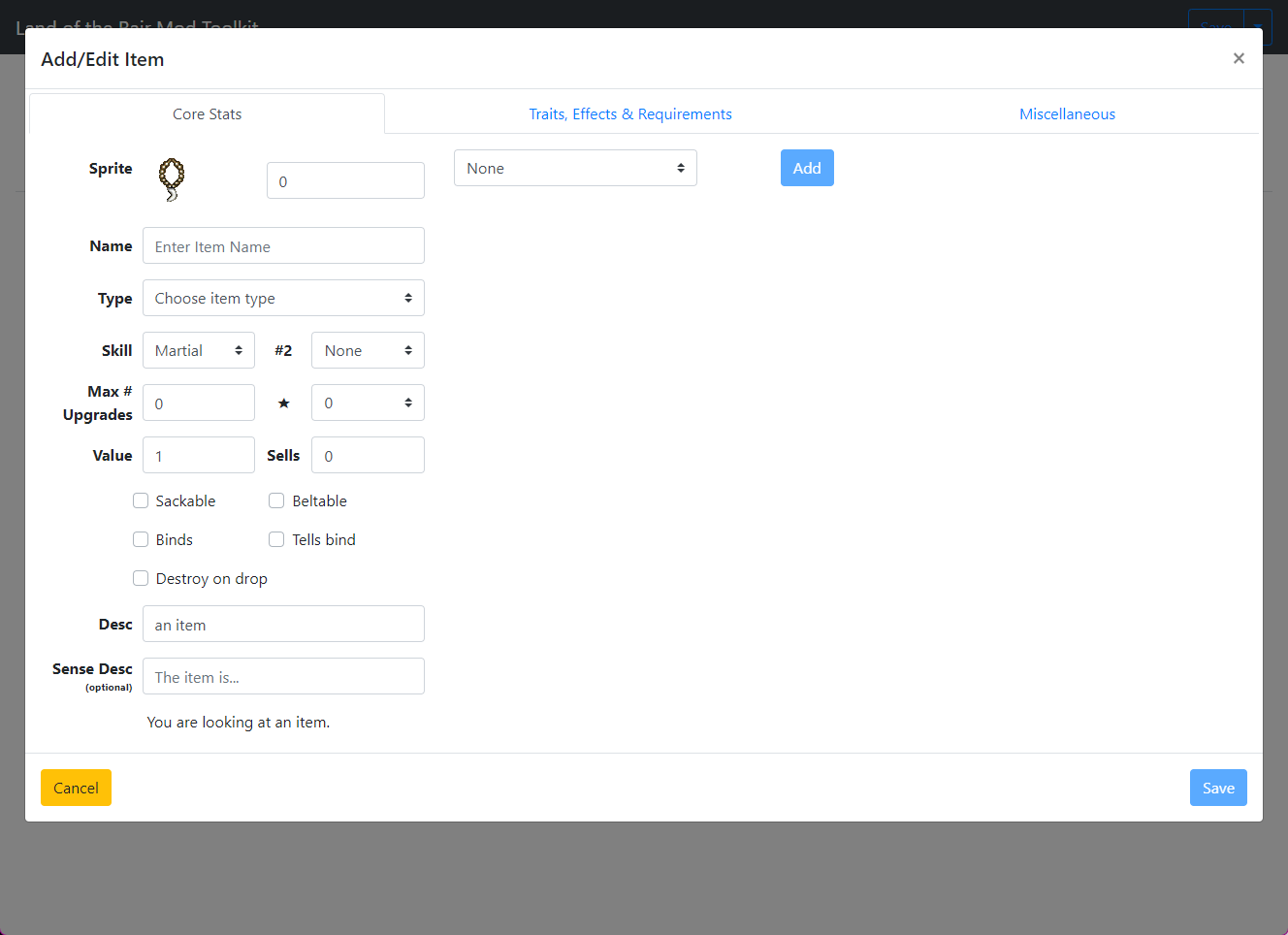 In the left column, you can set the required settings for an item:

In the middle column, you can choose what stats the item boosts.

In the right column, if applicable, there will be miscellaneous settings that pertain to specific item types. 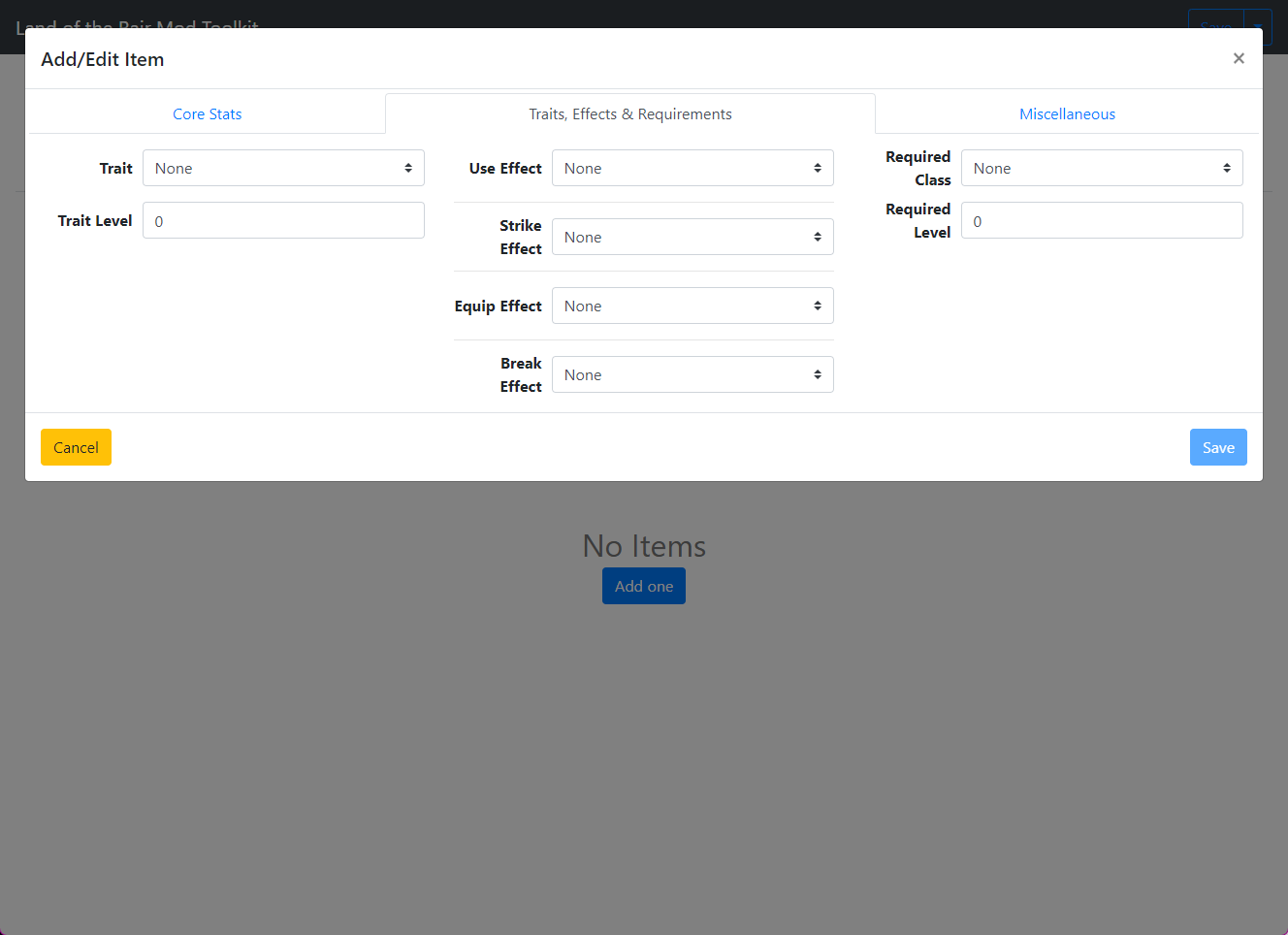 In the left column, you can set the pre-set trait for the item.

In the middle column, you can choose the effects that trigger when the item is used, when it hits something, when it’s equipped, or when it’s broken.

In the right column, you can set the required class and level for the item. 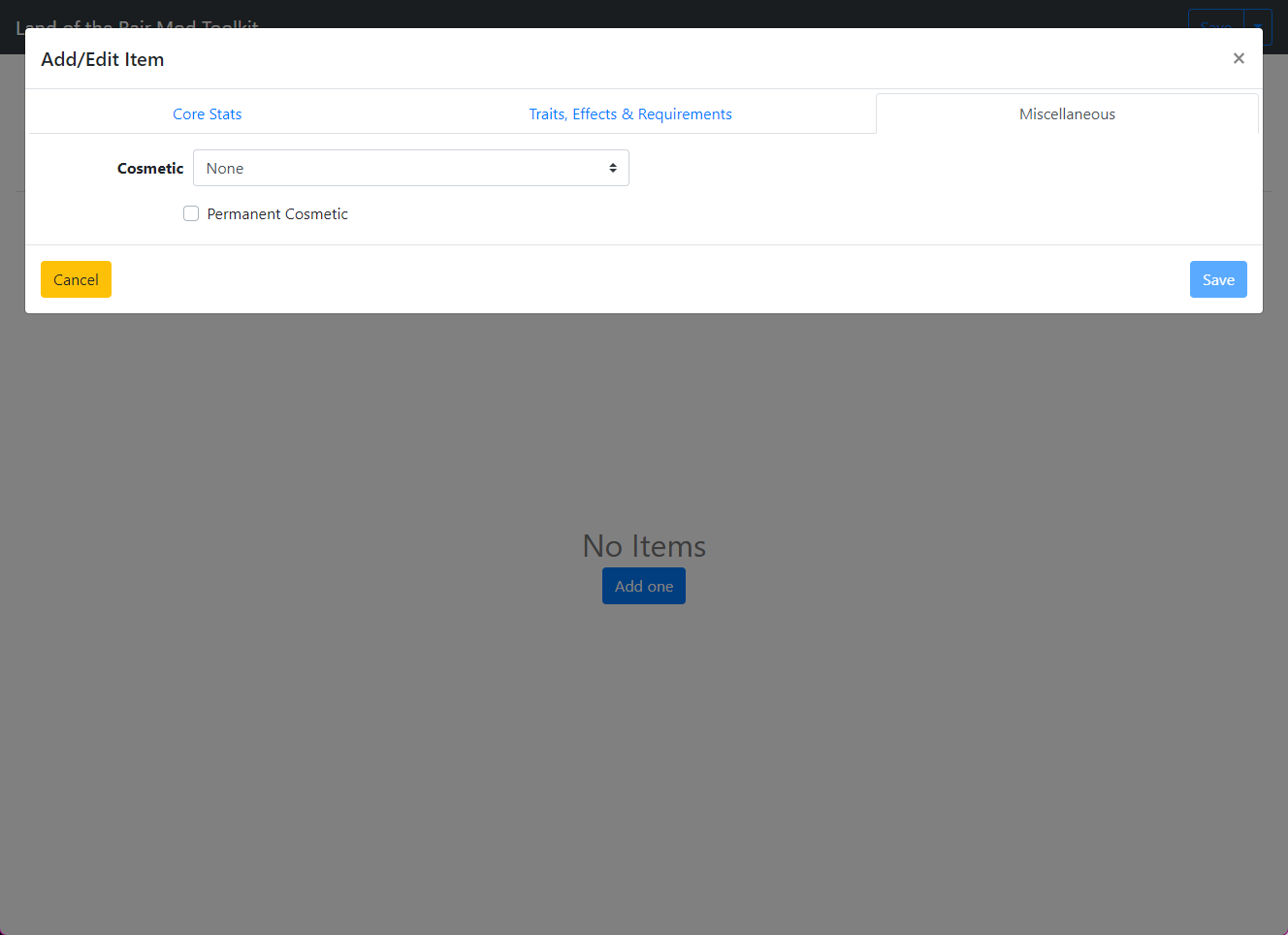 Here, you can choose the cosmetic for an item. If the “Permanent Cosmetic” checkbox is checked, the cosmetic can not be taken out of the item. This should be checked for most items. 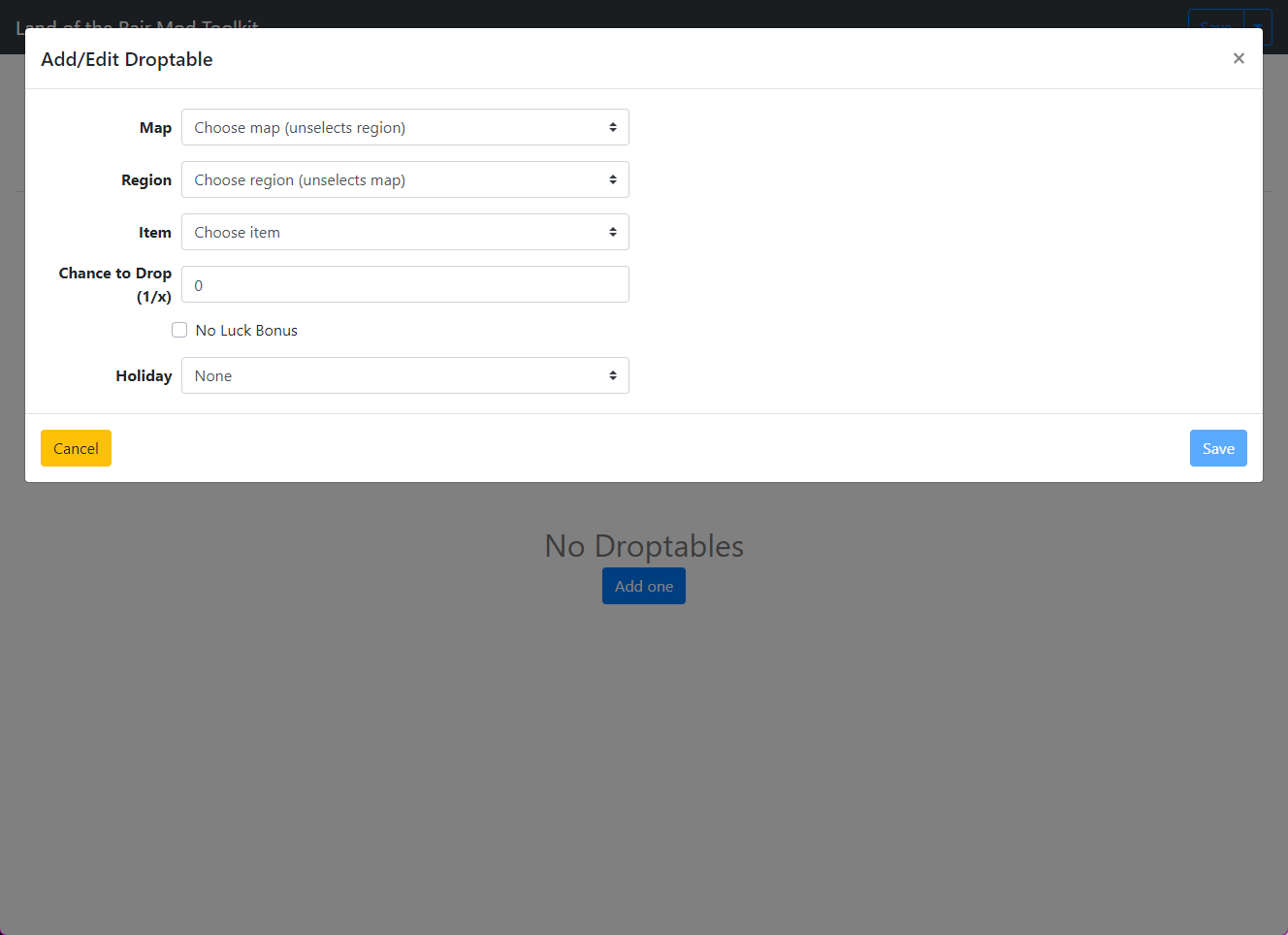 After creating at least one map and one item, you can add Droptables. These are how players get map- or region-based loot. In the data files, drop tables are formatted differently, such that there is a list of items per drop table. Here, it made more sense to make the droptables display one item at a time.

You can choose either a map or region drop (based on the maps you’ve created), an item (based on your items), a chance to drop (if you set it to 100, it will drop 1/100 of the time), whether the player luck bonus should be used (this makes it easier to find items), and if the item only drops on a certain holiday. 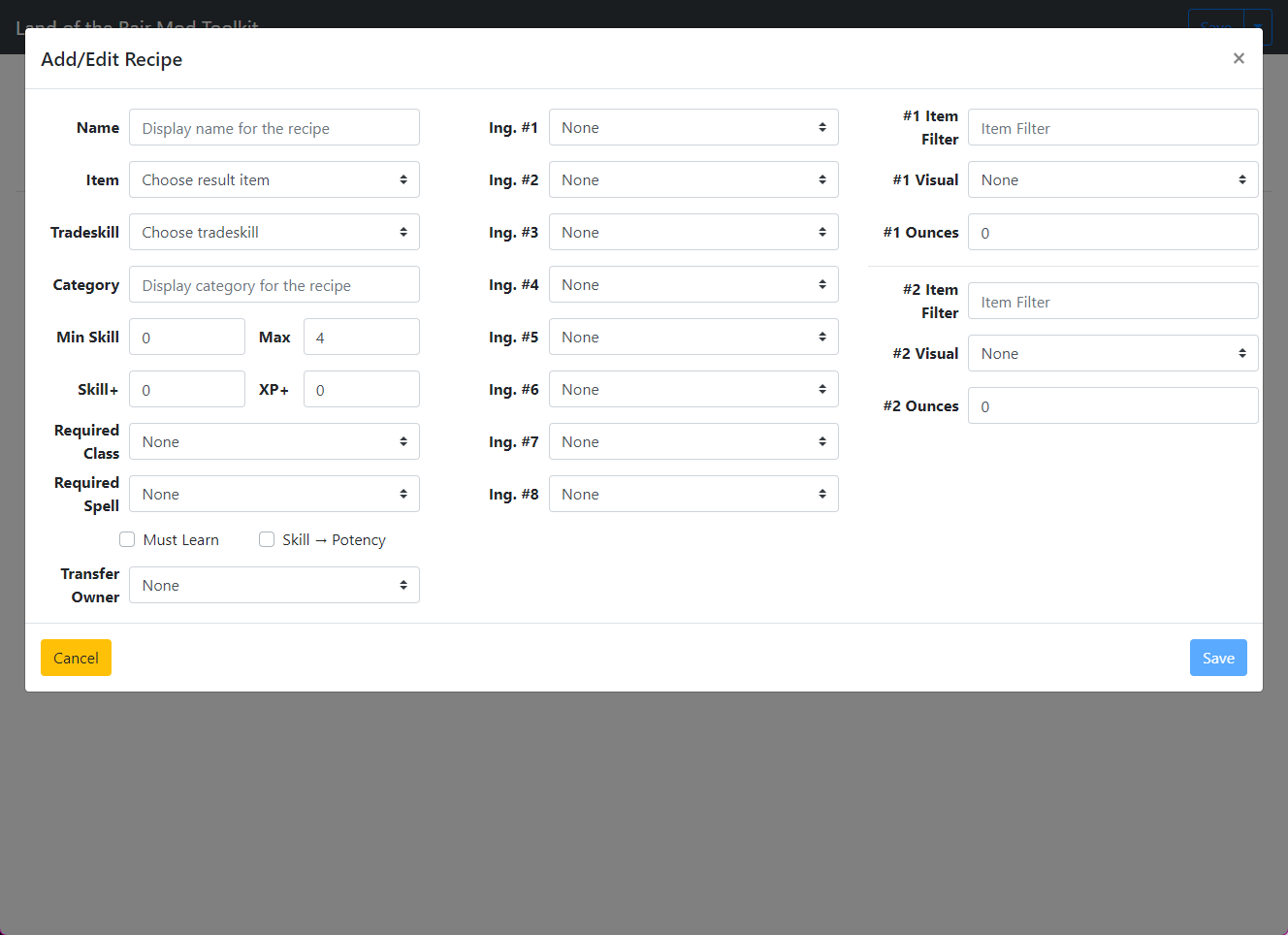 After creating at least one item, you can add Recipes, which are used by tradeskills to let players refine items into other items.

Recipes have a lot of options that can be set, but the important ones are: 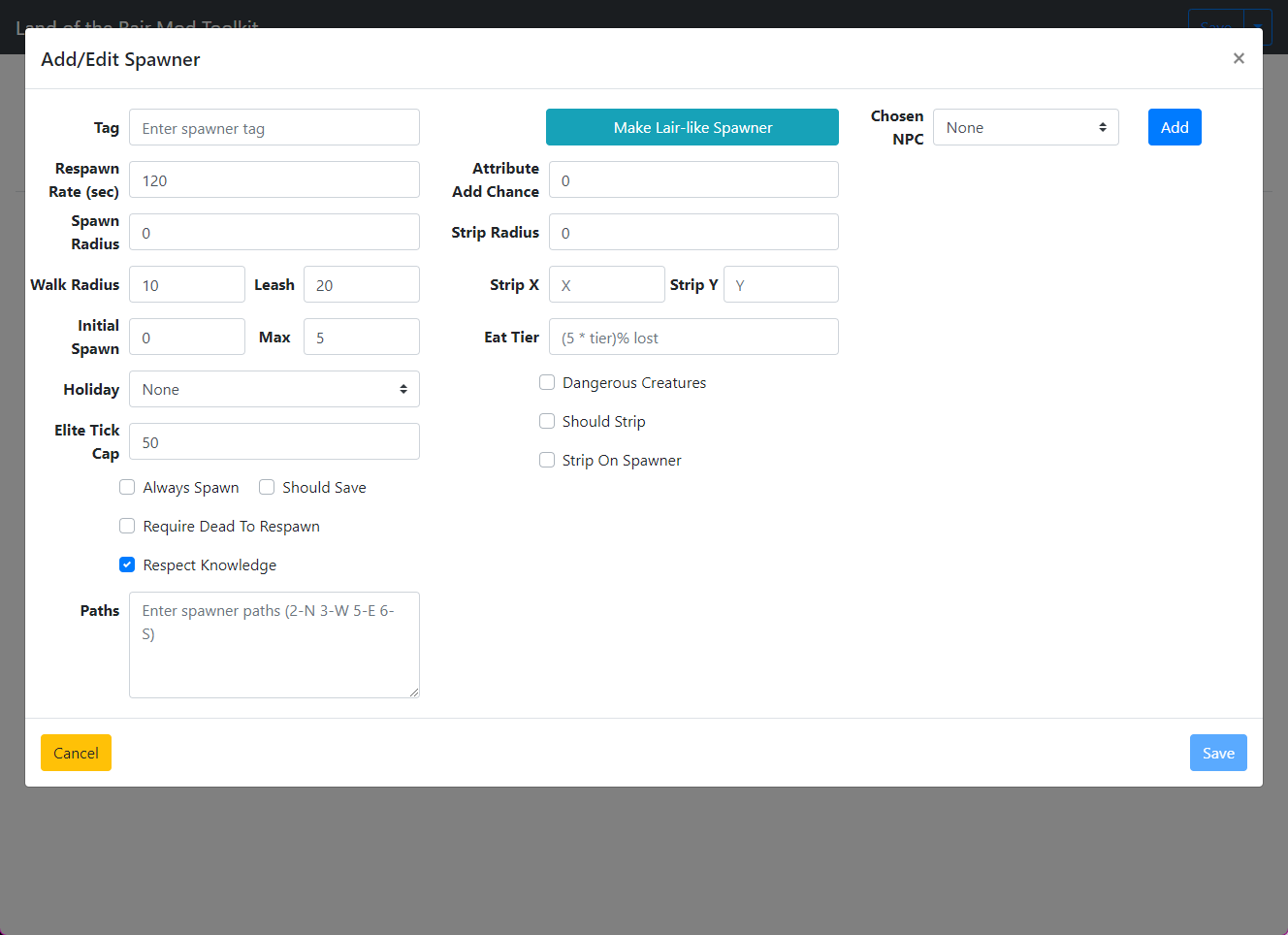 After adding NPCs, you can add spawners for them to utilize in a map. There are a lot of properties here to consider, but most of them should be fairly straightforward:

In the middle column, there are some primarily-boss focused options:

The right column lets you choose NPCs to spawn at this spawner, based on weight (see Weighting below). 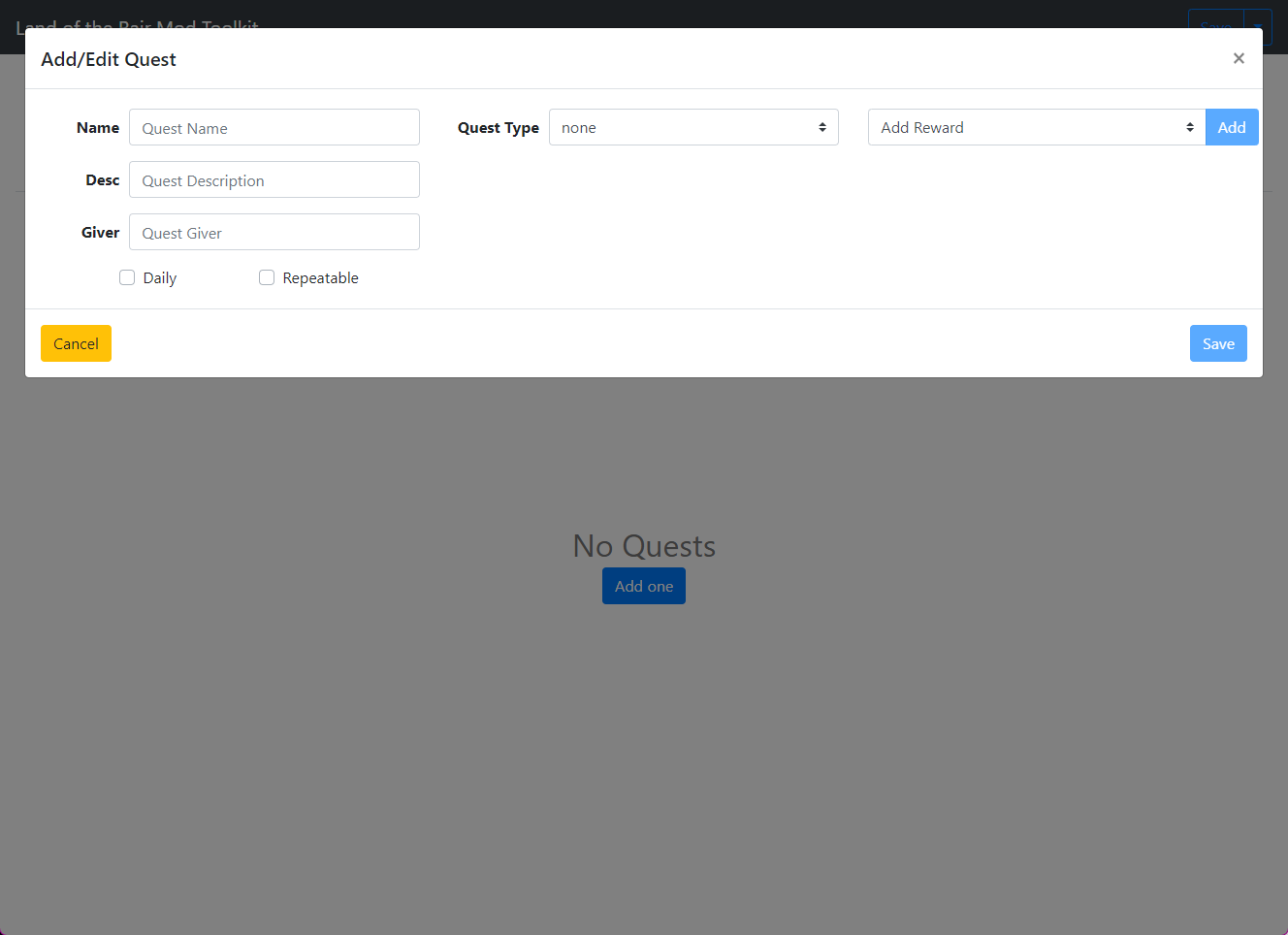 In the left column, you can set the quest name, description, and giver. The description and giver are display only for the in-game quest log. You can also toggle whether the quest is a repeatable quest (you can repeat it immediately upon completion) or a daily quest (you can do it at most once per day).

In the middle column, you can set the quest type, and all variables related to that. Most quests will either be “none”, “item”, or “kill”.

In the right column, you can choose the rewards for the quest.

When making an NPC Script, there are a few tabs, although two of them will eventually be updated to support a friendlier UX for users. All the same: 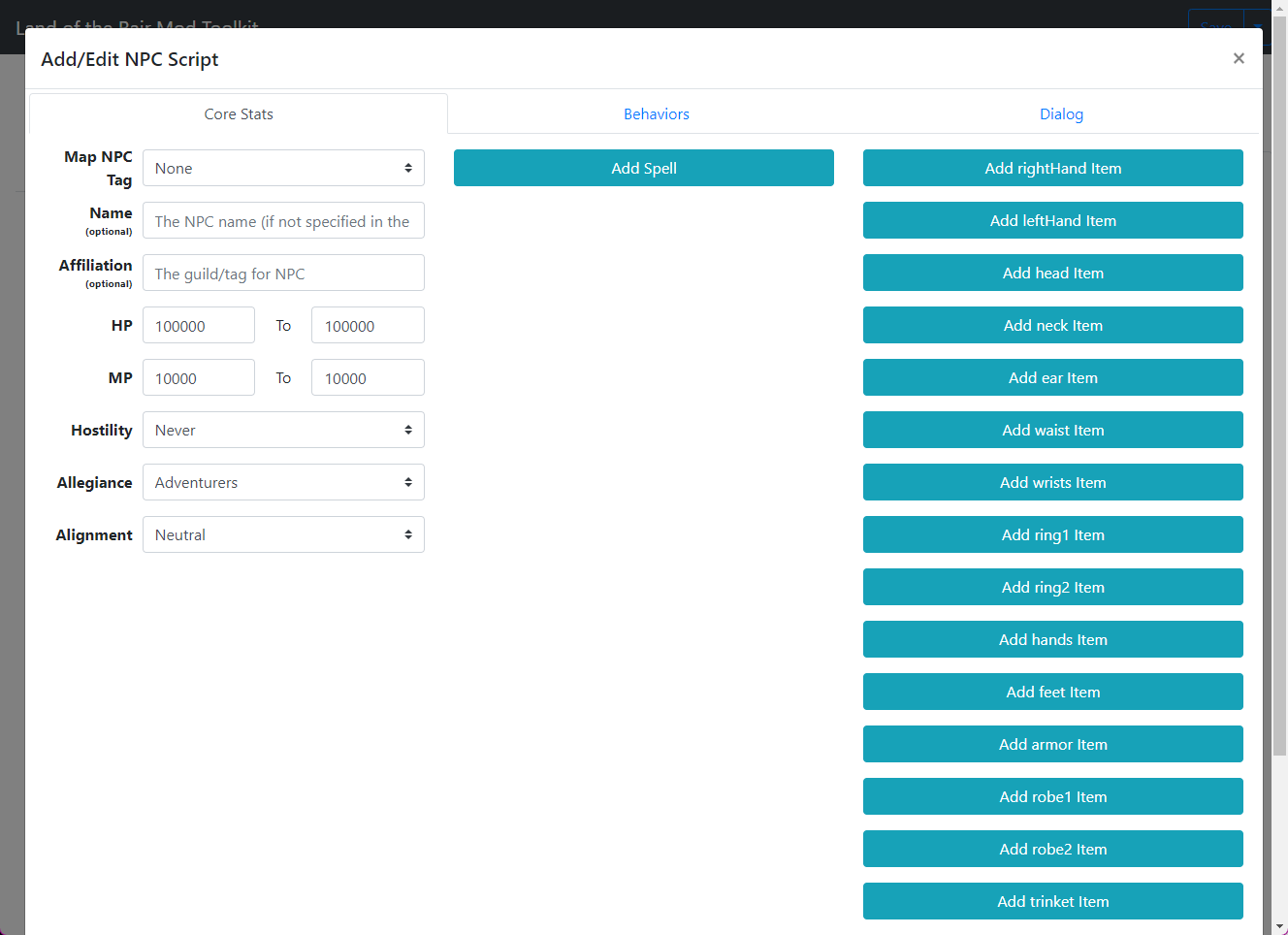 The most important thing here to set is the Map NPC Tag, which determines which NPC to bind this script to on the map. Everything else set here is handled the same as in the NPC editor. 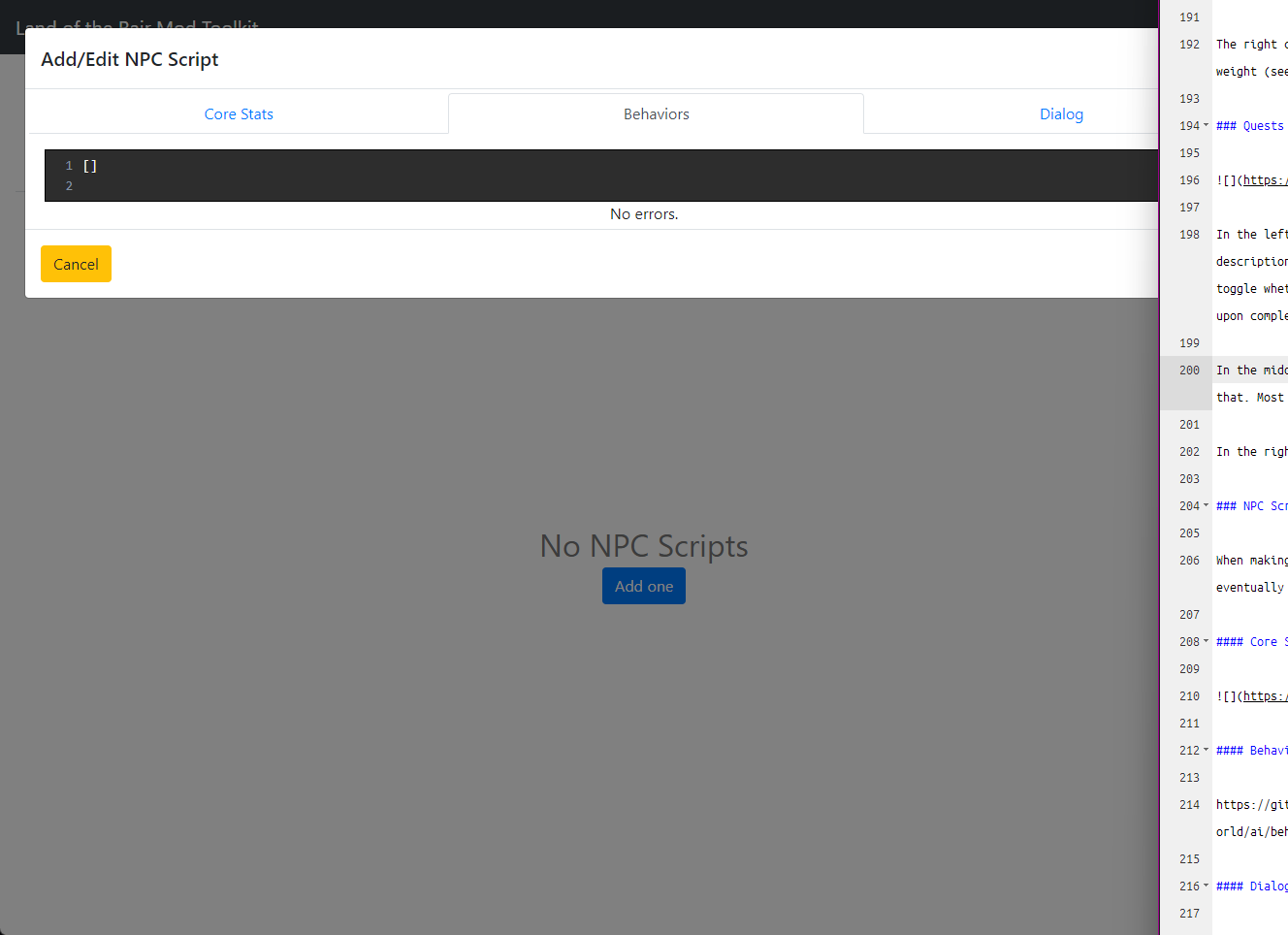 Here, you have to write YAML for your NPC behaviors. The most common NPC behaviors will be shops, but there are examples for everything! Check here for a listing of behaviors, and you can find examples by searching here. 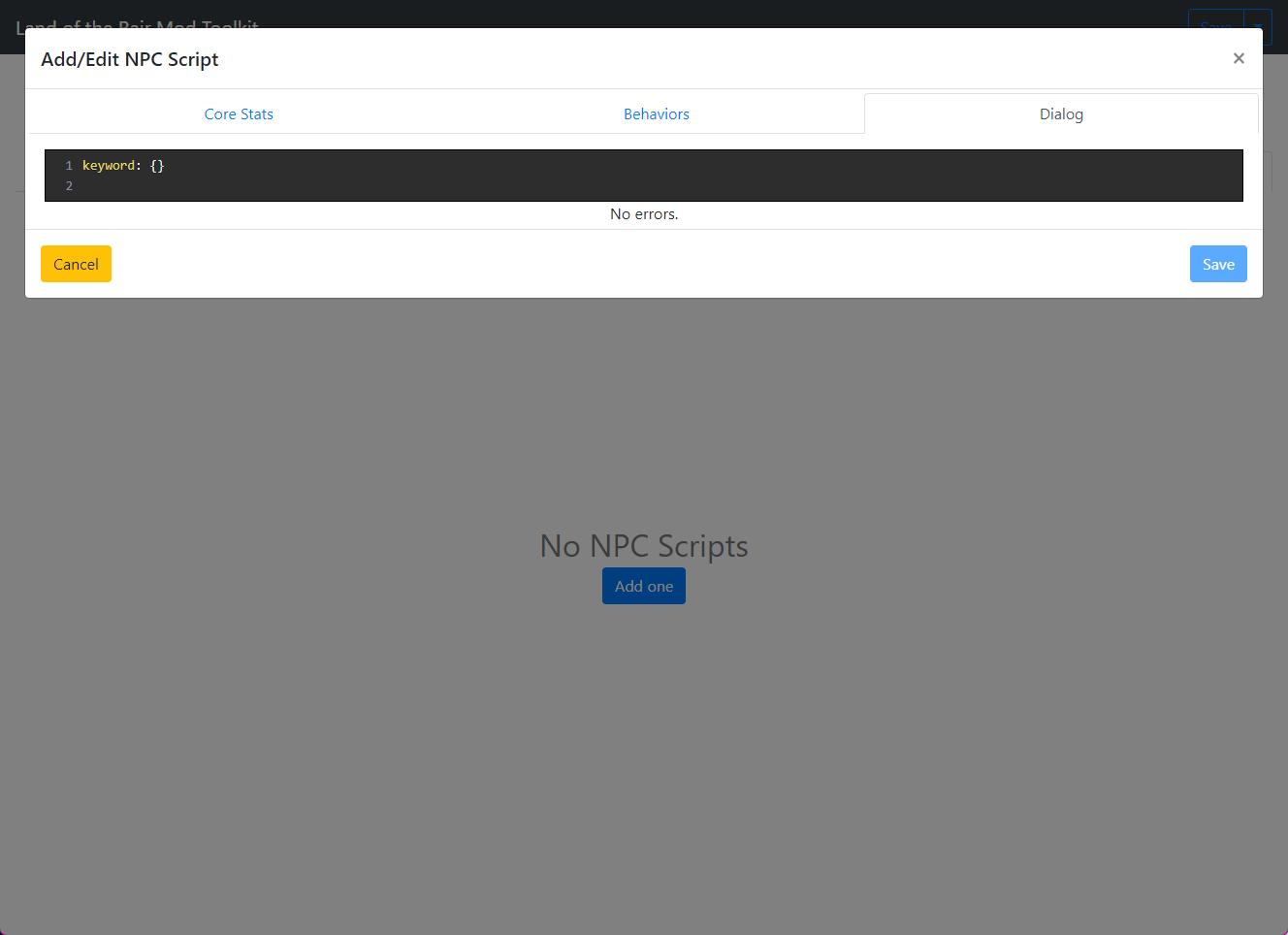 Here, you have to write YAML for your NPC dialogs. This can be as detailed as you would like, but should be copy-pastable from other examples found here. When in doubt, ask! 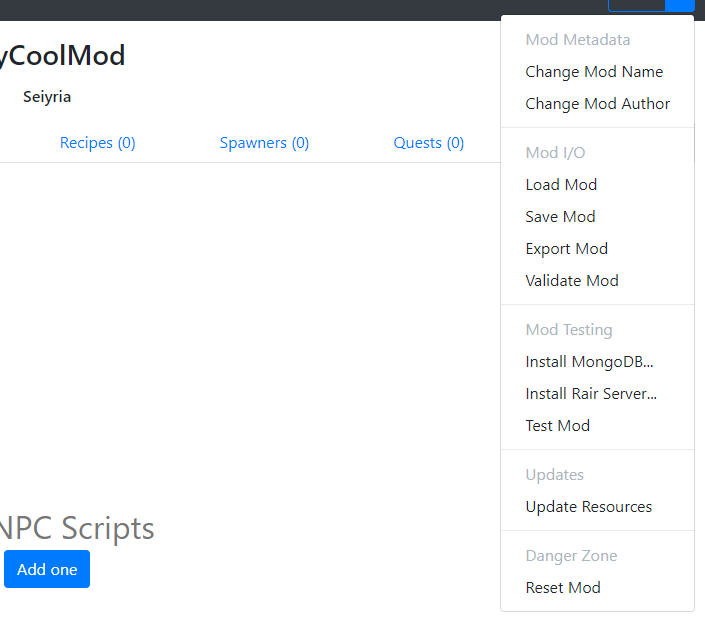 Most of this menu will be straightforward, but there are some important details to know about certain options. Only those options will be covered:

Differences Between Load, Save, and Export Mod

Load and Save mod are used to work with a user-readable version of the mod. This is the format the modkit tools understand.

Export mod is used to create a version of the mod that Land of the Rair understands.

The process for submitting these mods are not yet finalized, but will likely be something along the lines of “submit a certain file”, which will be the result of “export”.

When testing your mod (which you should!), you will first need to hit “Install MongoDB…” and “Install Rair Server…” to download and install the executable server code, as well as a database. The total download will be ~370mb (which is why it’s not done at startup).

After this, you can Test Mod, which will let you actually get in there and test your maps, content, etc. 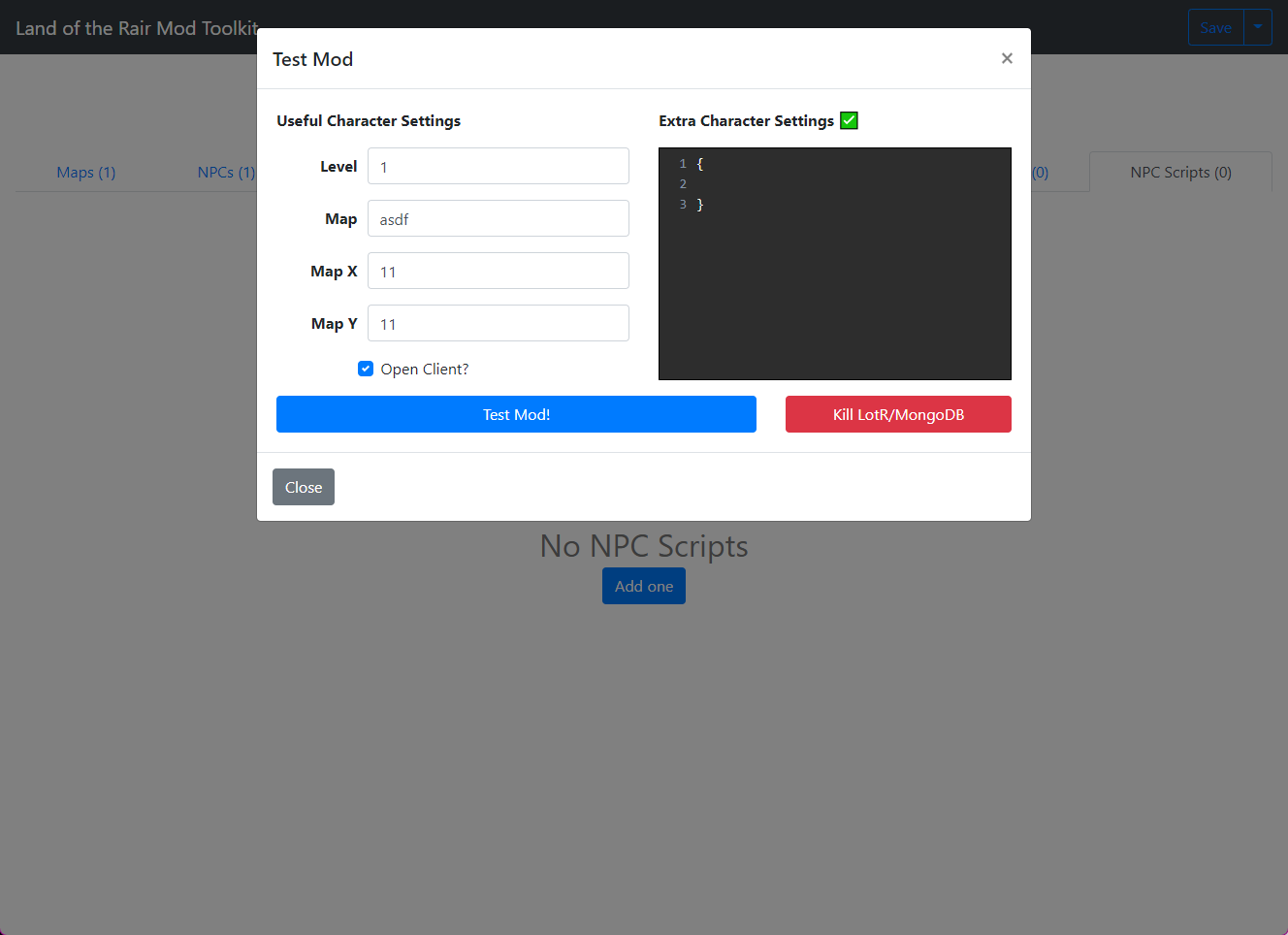 On the left side, you can set the level, map, x/y to force upon all characters for really quick testing. On the right side, you could set “extra” properties if you knew the property you wanted to set. For example, you could set it so any time you log in, you are also the “GM” allegiance, which makes you neutral to all creatures. To do this, you would set the Extra Character Settings to: { "allegiance": "GM" }.

If you have the open client option checked, it will open a new instance of the client pointing to your local server. You generally don’t want to open more than one client as it will kick you out of the others.

You can also kill all database and server processes running, if for some reason they’re lingering around.

Once you get into the game, you can use GM commands to tweak, summon, or otherwise test your mod. You can find more information on that here.

This option retrieves all spritesheets, template maps, and configuration data in the base Land of the Rair game (effects, spells, etc) for usage with the editor. If there are ever new spells that you would like to use in your mod, but don’t have them, update resources to obtain them.

Here are some frequently asked questions that may have come up while reading this page.

In this editor, there is also the ability to specify -1 as a weight, which means “always” (in certain contexts). If there are ever two inputs (as with NPC drops, and NPC sack), the left one will be “chance” and the right one will be “max chance” - set chance to -1 to ensure it always appears or drops (max chance can be set to anything). Otherwise, it will be a chance / maxChance of appearing (usually, you would set chance to 1, and maxChance to something like 100 for a 1/100).

In some cases, it is preferred to not use the -1 notation, and instead have a “none” result (this is the case with all NPC equipment). It is possible that this will one day be made homogenous; but that is not how it exists today.

Sometimes, there is also a “max chance” option next to a weight, or the option itself functions as “max chance” instead of “weight”. In this case, the option will not be weighted, but instead will drop in a 1/max chance.