Hey everyone! This week has been a really successful one. Two new major features, a full revamp of combat, and a lot more new features / bugfixes came through. There’s a looooot of cool stuff to talk about, so lets dive right in! 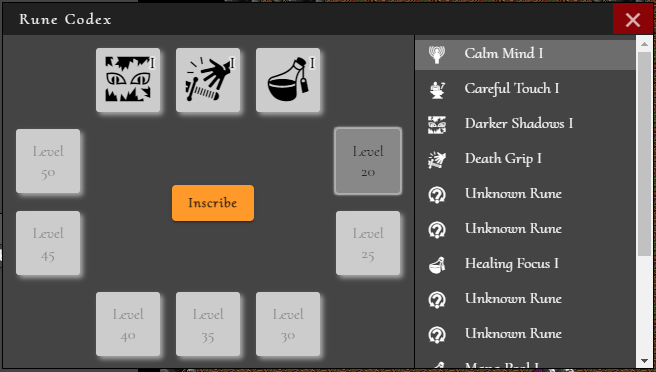 The return of Rune Scrolls. The previous system which had you attach them to items ended up being really clunky. So, this new system should hopefully be better. Here’s how it works:

You find scrolls in the world like before. Instead of attaching them to items, though, you can learn them, assuming that your character is able to do so. This means you’ll be able to freely change your Rune Codex as you learn more and more Runes. Previously, you were limited to 5 of a certain type, and you had anywhere from 13 to 15 slots to add scrolls to your items. Now, you have just 10 slots, and there is no duplicate overlapping. You can’t add 5 Calm Mind I scrolls to your Codex. However, you can add a Calm Mind I, Calm Mind II, and a Calm Mind III! You also only have 10 slots, and you earn a new slot every 5 levels.

My hope is that this will allow the Codex to be more diverse than the previous system, allowing more Runes to come into play than before. 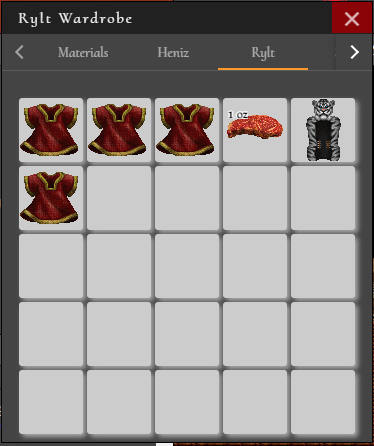 Yep, they’re back. The system works similar to Rair 1 - you can access your account-shared storages as well as any storages you’ve found. So, if you found a locker in Rylt, and one in the Tower, you can access them all at the same time. No more futzing around trying to find which locker you left your items in, just check them all from any other locker! 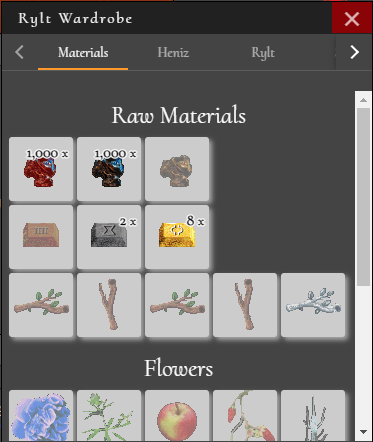 Wowza, multiple pictures! Yes, Material Storage is coming back too. As you explore the realms, you’ll come across materials needed for crafting (pictured by the faded sprite in the background). You can store these for use later! Twigs, ore, ingots, and more can be stored here.

A feature I always liked in Guild Wars 2 was the “deposit all” button they have on their inventory. Anytime, anywhere, you can deposit all the materials you’re holding into your material storage. So I added that too. You’ll notice it in the window bar for the Sack window. That way, when you’re out and about and collecting twigs, you don’t have to run back to town to drop them off.

Combat has been entirely revamped. Weapon damage used to be scaled based off of dice rolls per weapon tier, and numerically it went up pretty meh. It scaled well at lower levels but eventually was overshadowed and felt like it hit diminishing returns pretty quickly.

Now, the new shiny weapon system factors in a number of things per weapon:

The new formula is a lot more conducive to making weapons feel more unique, as well as allowing me to scale them much more finely depending on tier. Weapons will also feel much different! Halberds are for example the most damaging weapon in the game (tied with another), but they have such a high variance that they might not be suited to all situations. Comparatively, the Broadsword is a very consistent weapon and solid DPS as a result.

Magic was not left out from this rebalance either - magic damage has overall been brought up a bit. It wasn’t changed nearly as drastically though! 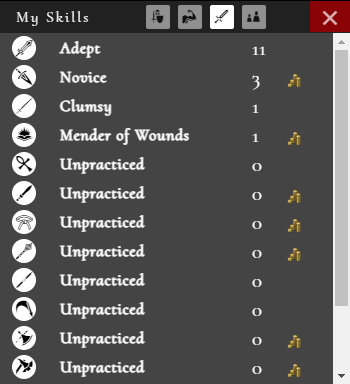 A feature that was commonly requested was to pay skill forward with coin. I pushed back for a while originally because it seemed archaic, but it’s one of those things that kept getting requested, so I figured I’d put some time in and figure out how to make it look nice and work well, and here we are. I’m really happy with the results!

How it works: A trainer can train you up to their max skill, which they can now let you pay forward for as well. You can pay as much gold as is required to get you there twice as fast. Each piece of gold you pay adds an extra skill point every time you earn one, so you can think of paid skill as 2x skill. So, the Rylt trainers will only let you put in about 2k, which is about how many hits it takes to get from skill 0 to skill 7. Obviously, this number goes up - and pretty sharply - but I think it’s worth it.

After that, I have some small UI changes I’d like to tackle, and then I’ll try to work on the party system. It’ll be mostly like the old one, except hopefully way more stable.

If I somehow still have time after that, I’m going to fix up the desktop client.

I have a lot of unknowns in this coming week, but hey, it might go really well!