Hey everyone! Today is an exciting post for me. I’ve finally finished one of the main features that inspired me to work on Rair to begin with, a place I’ve dubbed Solokar (and it’s sister dungeon Orikurnis). It’s a completely random dungeon that changes completely daily - loot, layout, monsters, everything. Today is also a day early than my normal post because I really want to share this, and I managed to finish up a day early.

A little backstory: The reason Land of the Rair was originally created was because I was personally dissatisified and disappointed with a few things from another game I’ve played. Namely, the utterly disappointing maze that was added at end game. I felt it could have been done so much better, but I knew that eventually I’d have to do it myself.

So started Land of the Rair, a very ambitious project, especially for a single person. I’ve taken breaks here and there, but I felt this was the right time to get this particular feature off my todo list - and lo and behold, two weeks of hardcore experimentation and we have it: literally, my dream project in my dream project. I could not possibly be more elated to finally share this with the community. There is a lot to talk about, so let’s break it down!

Originally, Solokar was going to be the project. Then I started to see what I could do, and it turns out, my system makes it very easy to add “new” dungeons - I need only specify a few details. So, the child sister was born - Orikurnis - and it’s a level 20 dungeon. Solokar is geared towards level 40 characters.

If you’re looking for them in game, here’s a spoiler to where they can be found:

These areas are unique in that you can memorize teleports or succor there, and if you die in the dungeon, you are taken to the dungeon spawn instead of your normal spawn point. Additionally, any gear you drop while in these dungeons is teleported out to the spawn point, so you don’t have to worry about fishing out gear before the reset.

The map layout & visuals are different every day. For those interested, the entire dungeon is seeded based on a combination of year, and day of the year, so no two dungeons - ever - will be the same! These dungeons are 100x100, and hopefully feel different and fresh without being too tedious.

Here are two examples of my early tests, that are not too dissimilar from the final results:

You’ll see that one of them is a “dungeon” of sorts. Discrete rooms, hallways, doors. The other is more of a cave - completely open, flooded, and fairly randomly laid out.

There are a lot of visual pairings, but these are two of the more “friendly” pairings. Maps will choose a random layout config per day, they’ll choose random decorative objects, and whether or not they should spawn with liquids, trees, etc; so one day you might be in a flooded cavern, the next you would be in a plains surrounded entirely by trees. 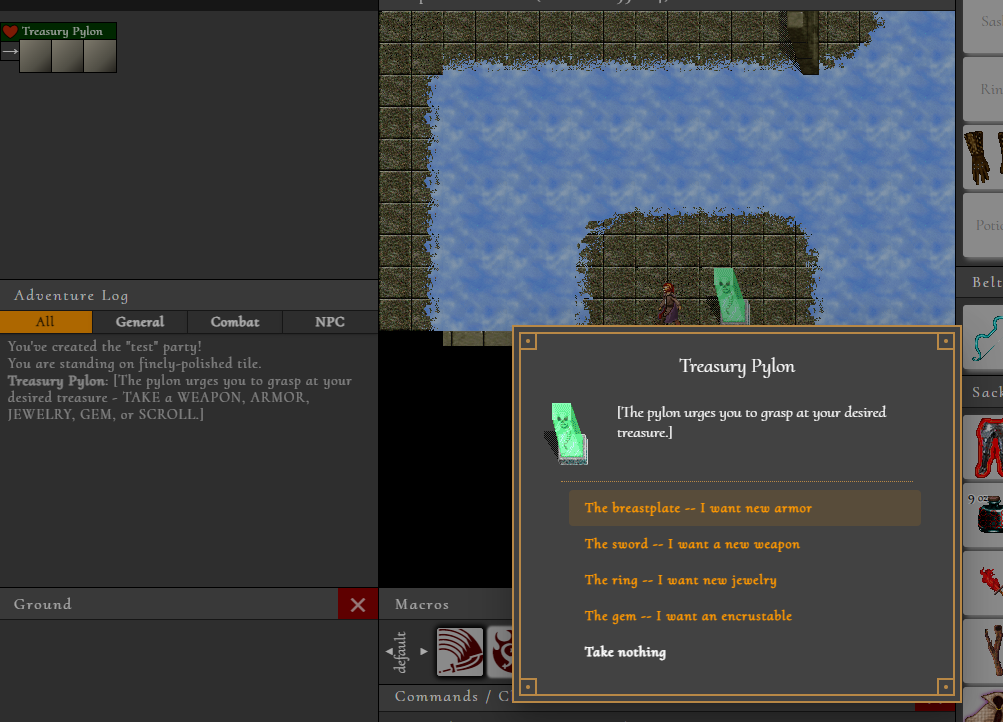 The Treasury Pylon allows you to pick a type of item you want - Weapon, Armor, Jewelry, or Gem - from the potential loot items of the day. As a note, these include any potential item that could have dropped, not just the ones in the pool. It includes all Basic, Powerful, and Legendary items at the same rate, as well. You can loot from the Treasury Pylon once per day per character.

Each dungeon config has two different monster groupings that will spawn there. Sometimes they’ll be fighting, sometimes they’ll work together. Some of them will even be friendly towards some players.

Each monster grouping, for the most part, has a “legendary” monster associated with it. One or two do not, but the remainder do. What a legendary monster entails here, is that it will be stronger than other creatures, and it will always drop a Legendary loot item (see below for more info on this). This item may or may not be normally obtainable through killing other creatures. Legendary creatures are on a one hour respawn timer, and there will only be two of them in a dungeon at a time (one per grouping chosen).

Creatures spawned here are similarly randomly chosen, although they have some pre-determined stats and abilities. Daily, there is a “scenario” chosen - one could be “Beast Kingdom”, which would spawn any two “Beast” monster groupings. There could also be “Town vs. Beasts” which would pit the townspeople against a random selection of beasts.

And when I say beasts, that could be any of the following: wild animals, flying terrors (harpies, griffons, rocs, etc), lizardfolk, dragons, or finally smaller scaly creatures.

There are a fair number of themes that should keep it interesting for a while.

Items in these dungeons can be randomly enchanted with Runes, which are small, preset configurations that apply to a larger subset of items. For more info on these, check out the Modifiers section below.

For these dungeons, there is one item for every type of weapon, one for every armor slot, and of course, rune scrolls and gems.

Weapons and armor will be randomly given a sprite from a safe list of sprites, so visually they’ll be different every day. They also come in 3 tiers: Basic, Powerful, and Legendary.

Powerful and Legendary items get a unique cosmetic (each, per dungeon), and multiply stats on them by 1.5x and 2x, respectively. Beyond that, all 3 tiers of items share the same base stats. If a robe gives +100 F/I prot, the Powerful will give 150, and the Legendary will give 200.

This gets more interesting when you factor in Runes, which I’m slowly getting to, but those are in Modifiers.

On top of loot, these dungeons are a great way to farm for trees and ore. There are always 100 nodes of farmable material.

Additionally, there are two new materials: Orikalcum and Soronite. Orikalcum drops in Orikurnis, and Soronite drops in Solokar. These are used in some new crafting recipes that create some fun weapons.

With the egregious amount of loot, there is also a unique drop table every day. This includes a subset of all potential weapons and armor that will potentially drop from any kill. There are also 3 gems chosen each day (out of 10+ new ones) unique to these maps (scaled based on the difficulty), and 3 rune scrolls each day as well.

Creatures that you would normally need to tan merely drop their armor here. There were too many logistics involved, and I don’t think I’ve yet ported the survival skill from Rair 1, so in an effort to get this out sooner rather than later, I’ve decided that tanning is unnecessary here. The ether merely forces their fur or scales onto the ground.

Runes! I’ve been mentioning these for a while now, but this is the crux of the item system. There are a lot of potential runes, such as The Boomerang, The Experienced, The Mirror, and so on. You’ll see them referred to by name more than anything else, and at a glance you can know what they are after enough exposure.

Items have been categorized by potential “tags”, such as Metal, Small, Jewelry, Offensive, Ranged - and more. These Runes are applied to a given tag, and each Rune can only be chosen once per day, however multiple Runes can apply to the same tag. So, weapons might get multiple applied, and then these Runes would apply to each weapon that drops. Or, if Metal is chosen, then the Rune will be applied to, for example, Breastplates and Swords.

While these items may often be uninteresting, some specific combinations may prove extremely cool or valuable. For example, imagine an overlap of the following:

Individually, you’d probably not look twice at a few of those. But collectively? You’ve got an item that gives:

Which is pretty neat!

There are a handful of new gems as well. This list will be told from the bottom values (Orikurnis), but for Solokar, these values are doubled* (mostly):

These gems are slotted fairly restrictively, but some of them are very stackable!

Instead of creating specific rune scrolls, I’ve made it so every player rune in their trait list that is a max level of 5 is given rune scrolls for level 1 through 5.

Now, when looting rune scrolls from Orikurnis or Solokar, rune scrolls will be given for whatever level the dungeon is set to (Ori is level 1, Solo is level 2).

For the first time, you’ll be able to farm level 2 rune scrolls!

Jewelry gets special treatment. In addition to potentially getting a Rune applied to it (which would apply to all Jewelry items in a day), the following things are true:

To prevent folks from spending too much time looking around, I’ve created a scout NPC that hangs out by each dungeon and tells you what item runes are applied to what items, and what abilities are applied to jewelry. As well, it tells you the creatures you can find, potentially.

To better utilize Orikalcum and Soronite, there are 8 new crafting recipes: one new weapon for each class at level 20, and level 40.

There’s a lot of bugfixes I have to make, but beyond that, I may start on a new level 30-35/40 map soon. It’ll be jungle-themed, and the first step into the new continent!