Hey all! Another great week (who knows when that’s gonna stop). Lots of new stuff, lots of stuff smoothed out. Overall, very productive! Changes this week include sorting out a lot of town-related NPCs and features for Rylt (and the rest of the game).

First and foremost, you can now get into Rylt, from the Tutorial. The Tutorial is no longer blocked by a door, either, it just has a somewhat winding path and an NPC who warns you that you’re leaving. The friendly NPCs in Rylt are almost complete, too, but I’ll get into those over the next few sections. Before that, I want to mention some of the changes I made to friendly NPCs: Some of them will move around in a more life-like manner. I’ve made sure most of these NPCs can be accessed from a few tiles away, so them moving doesn’t really matter much. Additionally, I’ve made sure each green NPC has a unique appearance (combination of body items and held items). There are also some new NPCs! 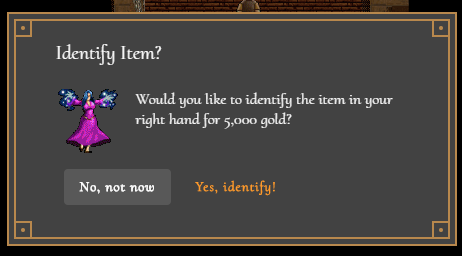 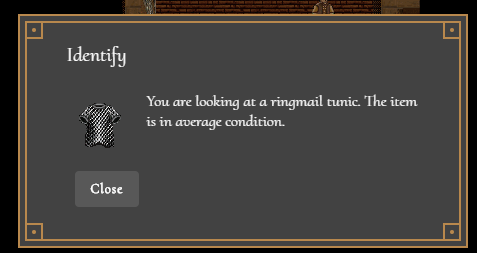 Like last week, when I showed the new Identify spell, I had plans to do this. This and the next NPC have a bit of tie-in from my changes, so let me first mention how this new setup will work.

Previously in lotr1, players had some pretty free access to Identify & Succor. That’s going to change a bit. I’ve culled back most sources of Identify & Succor, in favor of supplying NPCs that can be used to this end. This will provide everyone fairly similar access to Identify. This was a suggestion from Zane to tie things a bit more neatly with the fantasy rpg scene.

Identify NPCs will also scale, eventually - some will be able to identify better than others. 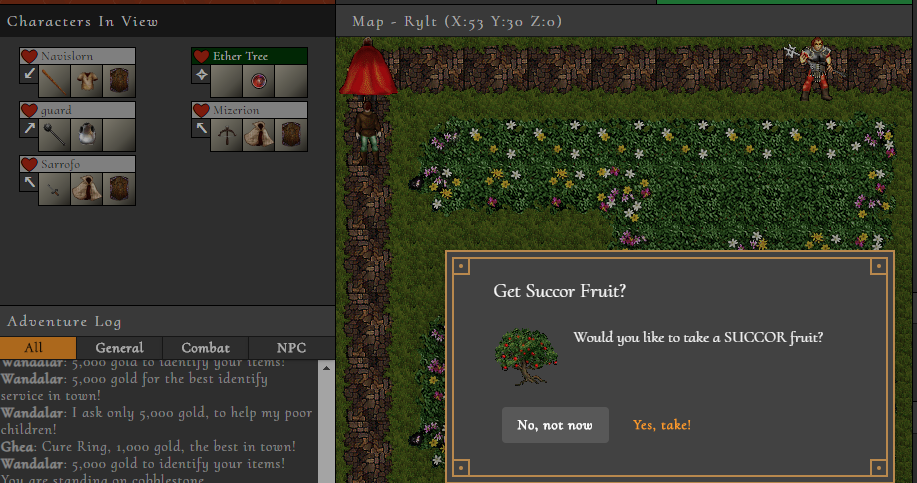 Another suggestion from Zane brings a new town NPC: the Ether Tree. The original plan was just an NPC that peddles Succor blobs, but I wanted to have a bit of fun with it. So, the, uh, apples on this tree are Succor blobs, and you can pluck them. As of right now, the service is free and unlimited, but eventually they may turn into a timed thing where you can only get one succor per hour per tree, or some such.

Of course, Healers can still Succor wherever they want, but this should make it easier for the average player to grab-and-go, instead of having to use a ring, make a succor, etc etc. Overall, I’m hoping this will be less of a hassle. Especially since maps no longer have unique respawn points, I’ll be curious to see the implications down the road.

Succor trees will be able to give any number of succor oz, but they start with 3oz. 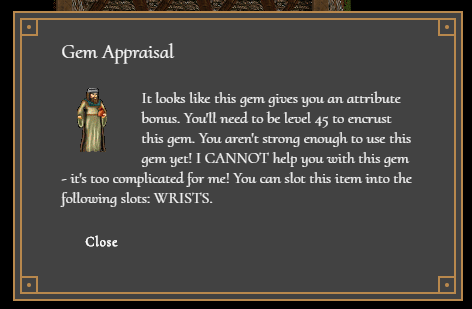 Encrusting comes with a bunch of new changes. Firstly, the Encruster will now appraise gems if you hold them in your right hand, telling you all about them. This will be particularly useful for the changes that come with the new Encrusting system.

So, it works like it used to, you can slot a gem into an item. However, this time around, gems can only be slotted into certain items. In general, stats will follow this pattern:

This means that you can’t just slot 10 +1 INT gems for a sick damage bonus. In this case, you’d be able to get a max of +3 INT, but that would take away from other things that require your ring or amulet slots. This also means that some slots are dead to certain buffs. You can’t slot +AC in robes anymore, so it’s no longer BIS to just slot AC in everything to the max a gem can be slotted.

However, the guidelines above are a generality, and simply that: guidelines. I plan to follow them. I also plan to break them, say, offering an omni-slot gem as an event reward.

I hope this system will provide a more interesting way to slot your gear, allowing you to better co-mingle buffs, prots, and other effects.

As you might expect, Encruster NPCs can scale. This would allow someone to, for example, hide a high level encruster in a dangerous area, who is the only person that can encrust a certain high level gem. 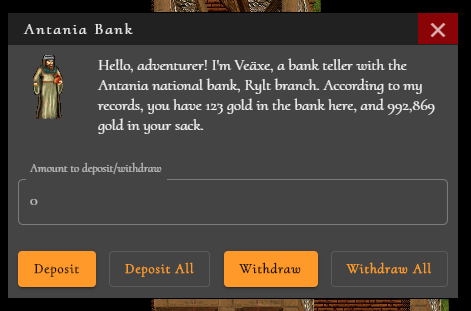 Not a whole lot to mention here - it’s the banker you know and love. However, your bank is now account-bound. You can share gold with other characters more easily by using the bank now. 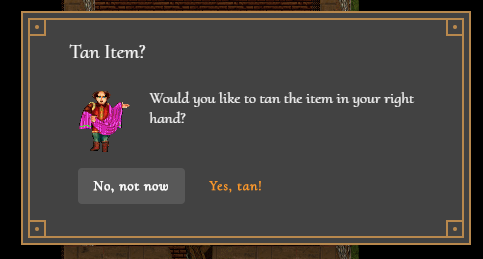 Everyone gets a dialog now. Gone is the antiquated system of dropping something to tan it. You hold corpses to tan them now, and he’ll only tan one at a time (not that you can hold more than two corpses anyway!). You still can’t tan players.

If you tan a corpse that hasn’t been searched, the items will be lost, so beware!

And, Tanners now scale. In general this won’t be an issue, but it boils down to the same thing as the Encruster: I can hide a Tanner somewhere for high-level kills. 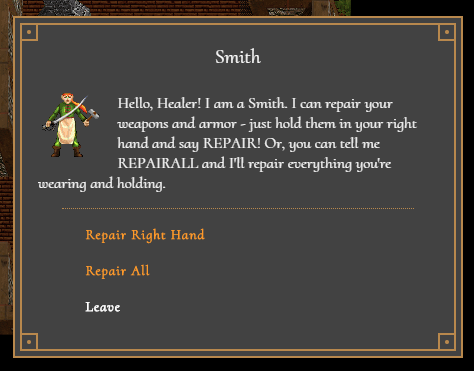 The Smith has gotten a bit easier to use, as well. No fundamental changes from before. 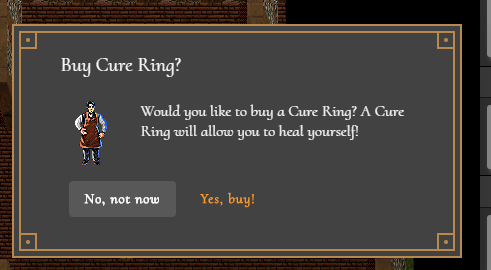 Everyone’s favorite NPC: the Peddler. Trying to sell you stuff you don’t want. They are fundamentally unchanged, they just have a nicer way to interact with them. 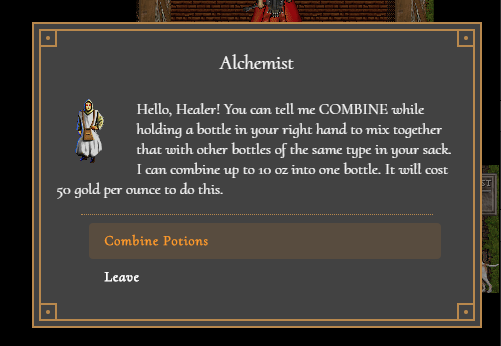 The Alchemist is similarly a bit easier to use, but fundmentally unchanged. 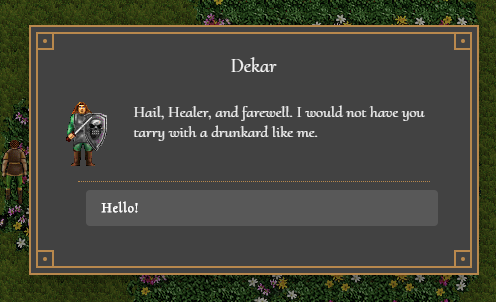 Let me tell you the tale of Darth Plagueis the - err… Sir Dekar. I actually don’t have much planned for him right now, but I’d like to utilize him later. Now that friendly NPCs can move around, fight, and die, I wanted to add my own SirHaldan.

Dekar is named after an NPC in Lufia, a game which I enjyoed very much.

He will wander up to 100 tiles from his spawn, in an extreme exercise to see how well the system works. 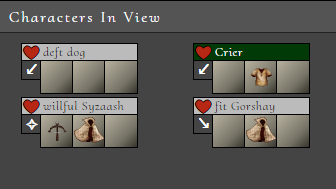 Some NPC spawners will have the ability to make their NPCs have a bit more oomph than before. This comes in the form of attributes: modifiers that buff various stats for an NPC. They’re somewhat rare, but those NPCs are worth double xp, skill, and anything else you might like, so it’s worth killing them if you have the chance. Elites are worth 4x, so an elite with an attribute is worth a total of 8x.

This is an attempt to spice up the game a bit more, so it’s not just the same NPC over and over, but rather some NPCs that might provide more interesting challenges if the right NPC gets the right attribute. This system will likely see some tweaks, and a bunch more attributes than what I’ve added.

Note, this was tested in town, but town NPCs actually cannot get attributes.

While there isn’t a picture, this is worth mentioning. Each allegiance (Pirates, Royalty, Townsfolk, etc) will get a unique, small bonus, which isn’t currently disclosed (although is somewhat trivial to look up). They each get one stat bonus (not a major stat, but a secondary one like stealth or perception), and two skill bonuses, one major, one minor. The major skill bonus is +2 effective skills, while the minor is +1 effective skill.

These stats do not overlap with skills, so if an allegiance has +Stealth, they will not also get +Thievery and +Throwing skills. This should allow each allegiance to function for virtually any class in some capacity. 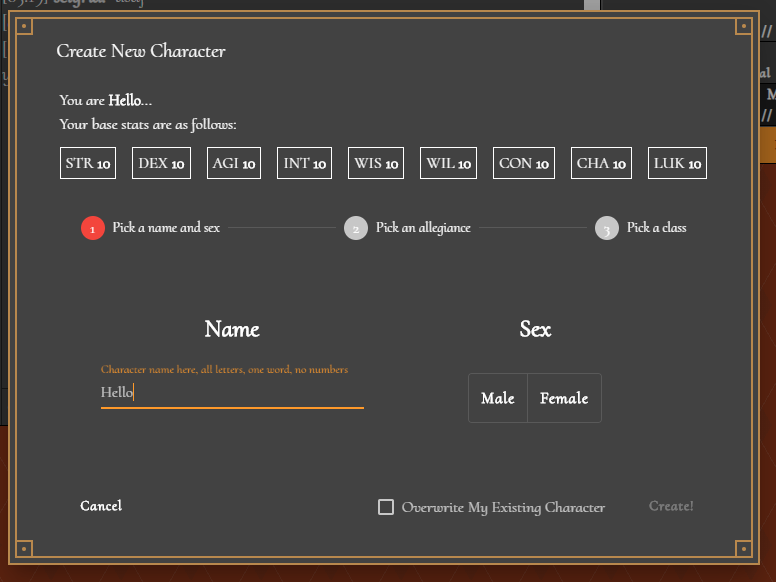 Been a while since you’ve seen this, huh? Not many real changes here, I just added tooltips for the stats and the gold border.

Rylt is pretty well done, but needs a lot of work. There’s going to be major balance issues, and there’s some other things that need attention. Quest NPCs in Rylt straight up are not implemented yet, as that requires a Quest system, and probably some kind of a Quest log (an often-requested bit from lotr1).

After quests are sorted, we’ll be getting really close to being able to test more openly, although some IRL stuff is creeping up on me as well, so it’s a bit of a race to see which happens first. Anyway, after quests, game-related stuff to do: