Land of the Rair Dev Blog #10 - Tales from the Tutorial

Hey all! This was a great week. Lots of cool changes, lots of cool new features that I’m super excited to talk about, including changes to Thieves and Warriors, which should make them a bit more interesting! Plus, this week had an exciting introduction of Traits. They’re a lot simpler now, and I think you’ll like it better. 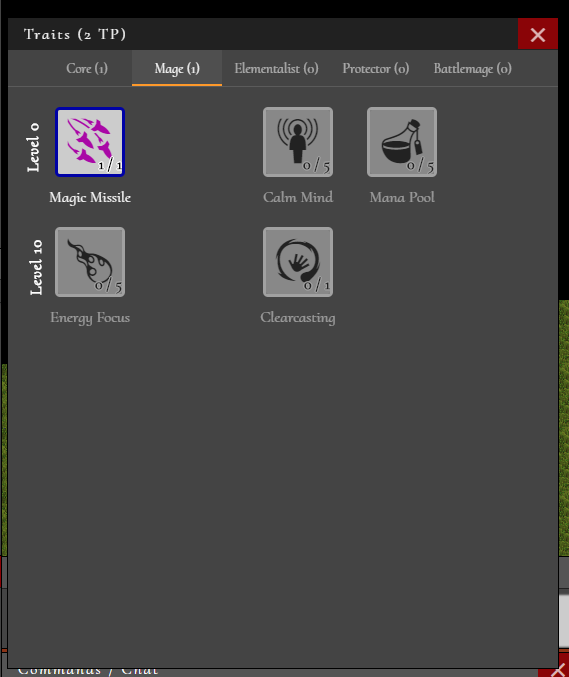 Let’s take a look at the highlight of the week: Traits! I do not have many traits in, since there’s a lot of tentative changes I’d like to make, incorporating community feedback, and I’m not sure how much besides the basics will make sense to keep around. But, the scaffolding is there, and we can talk about how it works.

Every level, you get 2 TP (similar to before). You no longer get TP for skill levels, just XP levels. Traits will either be X/1 or X/5 - X/1 means its a learned skill or something unique, X/5 means a stackable bonus. They’re also sorted into tiers. Every 10 levels you unlock a new tier, and each tier has 5 potential slots to fill for a maximum, currently, of 25 unique skills/traits per tree. I intend to continue with having 4 specs and will fill in a lot of extra features with what community members contributed.

I hope the new specs will be great, but it’s going to take a lot of time before they’re ready for the prime time.

You can still reset these at the trainer, and it’s free. Eventually there will be a cost, but for now, that’s a bit more annoying than is worthwhile. 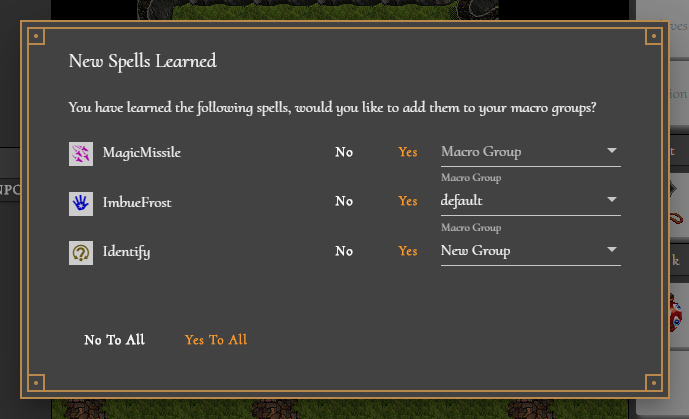 Now when you learn spells, you get a singular popup. You can add as many spells as you want to whatever groups you want (thanks Sarimash for the idea!). Instead of clicking 30 buttons when you log in for the first time from a new location, you can see upfront all of the spells you need to set up.

In Rair 1, there weren’t really any cooldowns or channeled spells, outside of FindFamiliar. In Rair 2, I decided to adopt more modern MMO mechanics for channeled spells and cooldowns on spells, and I’ve also made them first-class, which means they require no extra work to add or tweak for spells.

Spells on cooldown will show a timer on top of the macro, and when channeling a spell, you’ll see a specific buff for it. On top of this, macros can now bind themselves to a spell specifically, so your custom macros can have the correct cooldowns displayed on them.

Additionally, when you have a macro that is bound to a spell, and you no longer know that spell (trait reset, or it’s cast from an item), the macro will gray out, so you can’t use it. This will be a bit nicer than the previous solution of just saying “You haven’t learned that!”

Taking a look at combat previously, all magical combat scaled pretty solidly off of boosting WIL to negate damage as often as possible. When damage was negated, it was a solid, simple cut. That has changed.

Spells can now specify a WIL save, as well as a damage cut, much like you’d expect from, say, D&D. The system is fairly straightforward now:

No picture, but this is a new detail that will be fairly important. You no longer regen MP and HP every tick (1 second), but instead every 5 ticks (5 seconds). I made this change because it felt as though MP/HP regen were used to basically buffer your incoming/outgoing costs for HP and MP, acting as essentially cost reducers as you got them back right away. So, survivability will be a bit rougher in general, and spell costs will probably need to be tweaked to account for this.

No picture, but before I talk about Warriors and Thieves, this is important to mention. There’s a new macro mode called “AutoTarget”, which is a bit of a hybrid between new behavior, “Click to target” and “Instant”. Basically, these macros will automatically queue themselves as an attack on your current target (old Rair, you could have done cast magicmissile $target to do the same thing). The reason this behavior is being made first-class now is that new Thief and Warrior abilities will be taking advantage of it. So, without further ado… 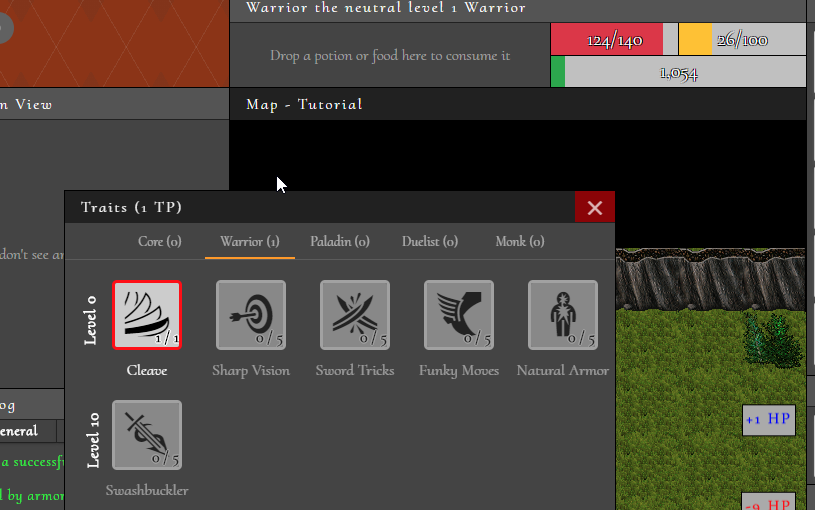 Warriors now have a MP-style resource called Rage. It will be affected by items that boost your MP. Every MP tick (which is now 5 seconds) will give you +3 Rage if you’re in combat, or -3 Rage if you’re not in combat. You also get Rage every time you hit, miss, or are blocked.

Warriors will be getting a new fundamental ability, Cleave, which consumes 10 Rage and does a physical-based guaranteed hit (like a spell), to demonstrate this ability to start.

In the future, more of their abilities will cost Rage, and utilize cooldowns, so they’re not “free” (compared to Mages and Healers using MP).

It wouldn’t do any good to talk about Thief before Warrior, as it’s about the same, but somehow, even more complicated. Really, what do you expect from Thieves? Simplicity? Nope.😅

Thieves have a new Stealth stat, which is their version of MP. It will also be affected by items that boost your MP. Every MP tick will give you +10 Stealth if you’re out of combat, or 1 if you are in combat. But it gets more complicated from here.

Thieves can Hide like you’d expect, but they can’t hide limitlessly. Stealth and Perception have been reworked to be significantly simpler, and more notably, no longer based on the distance between you and the other creature. This means that if you can be seen, you can be seen on-tile or 3 tiles away, the difference doesn’t matter anymore. This also means that balancing Stealth is going to be much easier this time!

You can think of +1 Stealth as +1 level, in terms of hiding. This will be a lot easier than the abstract “+300 Perception” food from Cyrena, for example.

Additionally, weapons no longer reduce your overall Stealth rating by a percentage anymore. They now reduce you by a static number of levels, which will be again much simpler. As an example here, a Halberd is -20 Stealth, so you can think of it as -20 levels for Stealth purposes.

Thieves, I tell ya. 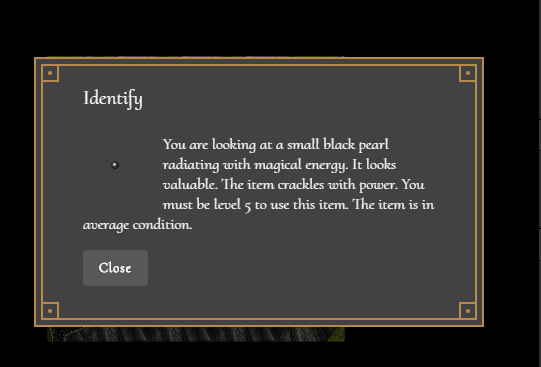 Nothing much to mention here, I just wanted to show the new identify popup for items. 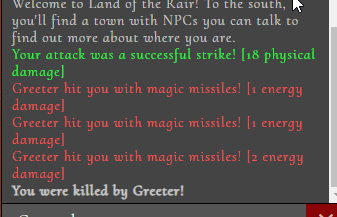 You might remember the Greeter, he’s the guy who says “Welcome to Land of the Rair!”. This time, he’s back with a vengeance. Well, if you attack him. So let’s look at what’s changed here!

Friendly NPCs can now walk, fight, and cast spells. I mean, if you hit them, they’ll get angry, that’s just how it works, right? So, every friendly NPC now has a good amount of health (level-appropriate, except the Tutorial, where they’re very boosted), real stats, real skills, and the ability to cast some spells or hit you really hard.

However, friendly NPCs will never drop their hands on death. I’ve already thought about it, but I figured people would just farm Cosmetica for scrolls.

This is just further work on a previous update, which will let town sieges happen more neatly.

Well, for the most part, everything is in place for the Tutorial to be working. I’m going to have Sarimash do a once-over of it to make sure I haven’t missed anything egregious, then it’s onwards to Rylt.

Once Rylt works correctly (all quests, items, npcs, etc) then there’s a lot of smaller details to sort out, such as the Discord integration, stats tracker, internal commands, Patreon integration, natural resources, and, well, it’s a lot.