Hey Rair players! This week was the last catch-up week to bring us back to what Rair 1 offered, and more. Mostly, we were missing tradeskills and ancient traits, but there were a few other small bits that got fixed as well. Lets dive right in on the new stuff! 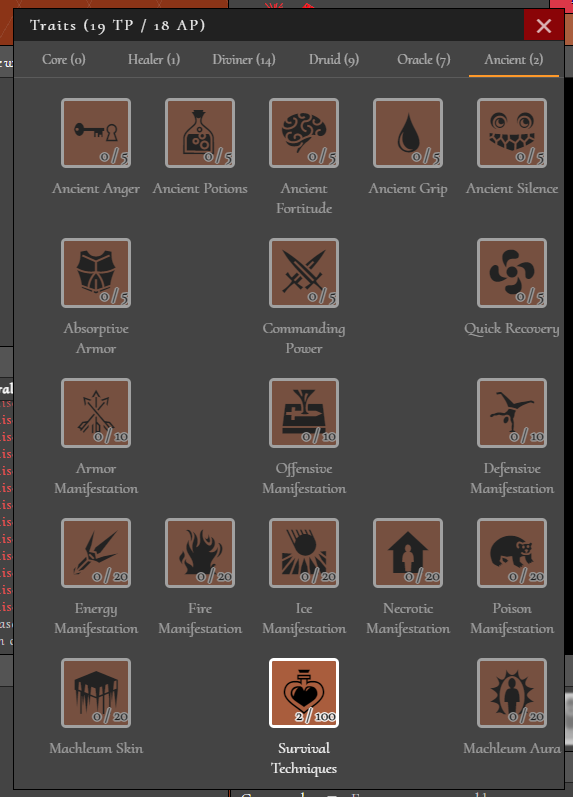 Once you hit level 50, you will be provided with the ability to earn AXP, a form of alternate advancement. To do this, you’ll have to find Alterna, an NPC that allows you to switch between the two. You can earn AXP by fighting anything near or above your level (level 45-50). You’re guaranteed to get at least 1 AXP per kill (you get 5 for elites, 10 for lairs). Each AP costs 500 AXP, and can be trained at your regular trainer.

AP can be spent on ancient traits, which you can see in the picture above. The nice thing about these traits is that you can learn them in any order, and they’re permanent, but small buffs. Some of them provide innate resistances, some provide raw damage, and the others, well, you’ll see! There are a total of 305 points to spend, and these caps will likely be increased in the future, depending on content and other changes that may come. 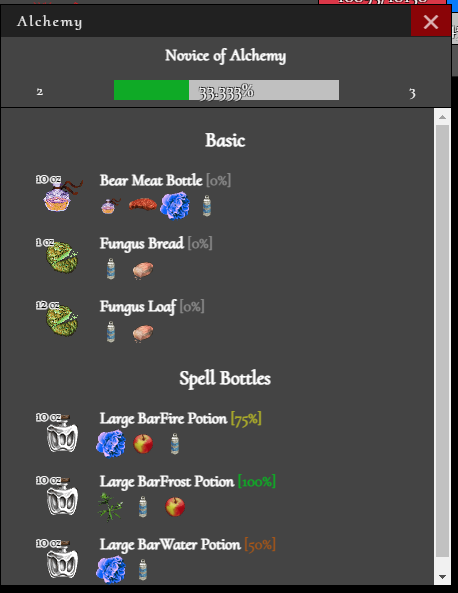 Here’s an example using alchemy. To learn a tradeskill, you have to go to the respective trainer and tell them LEARN. The tradeskills can be learned from the following:

Any character can learn all of the tradeskills. However, down the line, there will be specialty items that only a specialized crafter can make, and each character will be able to pick one specialization. These items are still being finalized, but one of them is really cool and absolutely worth the wait!

After learning a tradeskill, you’ll get a new skill that lets you open the window featured above. You’ll be able to, at a glance, see everything you know and what the requirements to craft it are.

Speaking of crafting items, a lot of crafted items will come out untied (except for the specialized ones). This means you can craft scaleplates and sell them! If you need an upgrade, the ownership of the item will transfer when crafting the second tier of the armor.

I’ve adopted a new system this time around: the skill requirements to level up are significantly lower than previously, but recipes have a chance of not giving you skill points (featured in color as [X%] next to the recipe). I feel that this model is much better overall as there are no significant/absurd skill caps, and there’s no need to scale recipe skill gain absurdly either.

You can gain skill up to about skill 23 for all of the tradeskills, although it will get tougher at higher levels. So, that said, lets talk about the individual tradeskills!

Alchemy is used to create potions and other foods that you can use to buff up or heal. It has a bunch of unique crafts both for each class, and some items are otherwise unobtainable in the game! Additionally, it provides a reliable way to get stat potions, which would otherwise be very rare.

Healer, Thief, and Mage also have some unique crafts centered around their respective classes.

Metalworking is primarily used to craft weapons and upgrade brick materials using ore. At this time, no class has unique crafts (yet). This tradeskill focuses mostly around creating those upgrade bricks, which can definitely provide good utility!

Spellforging is a bit unique in that it gets a new skill to go with it: Disenchant. When you find an item that emits magical energy (has a star rating), you can disenchant it, and you’ll receive Enos dust based on how strong that magical energy is. Disenchanting will also increase your Spellforging skill.

Enos dust is the primary crafting catalyst here, and can be used to make Owts, Enos, Daus, and Oles bricks. Each of these bricks can be used as an upgrade material, and some of them find use elsewhere!

This tradeskill can also craft wands and totems, with effects that aren’t present anywhere else in the game on wands or totems.

A few tiles have been animated! The tiles you can look forward to seeing in action are: spring water, water, and lava.

Next up, the modkit is going to get some work, and I’m also going to slow my pace down a little bit. It’s been a hectic few months, but it’s time to let the dust settle for a while. After I’m satisfied with the modkit, I’ll be tackling Solokar, a completely randomly generated dungeon that changes structure, loot, and monsters daily!